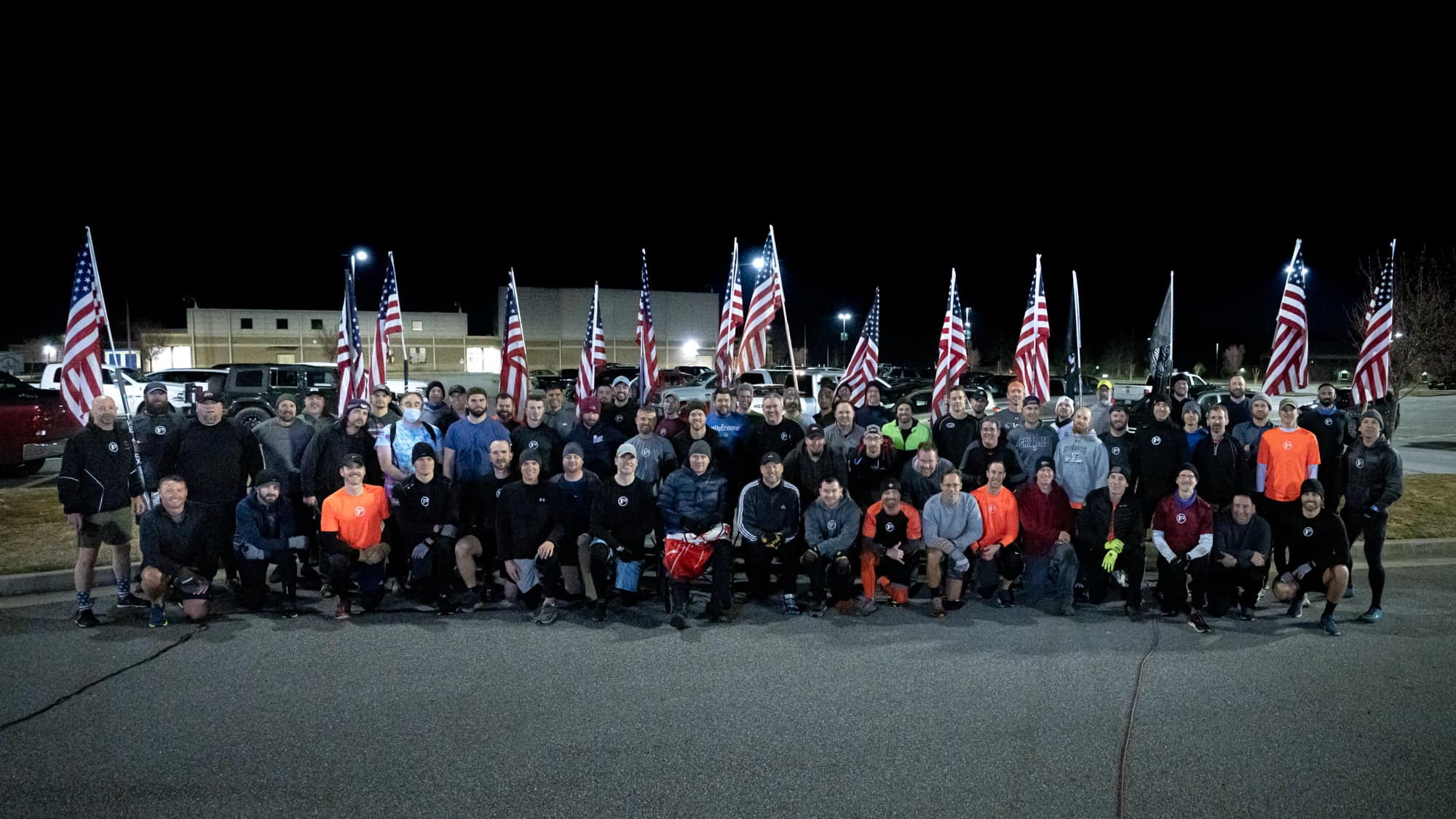 Dory – “Hey Pella the Kodiak 4 year anniversary is in February. Perhaps we should have an extended coffeteria to celebrate.”

Pella – “Oh man I have ideas. Lets do it up big and get a bunch of guys out.  We can do a Kodiak Games theme and have Dunkin donuts and bacon for coffeteria.  Will you help me Q?

With that simple conversation, the First Annual Kodiak Games became a real thing.  Add in a bunch of HIMs around the region talking it up and this idea started to grow.

Dory – “From what I’m hearing, we may have a good group.”

Pella – “ We are gonna have a crowd! We need more bacon!”

Wednesday morning @ 5:30am…the weather was perfect, tires, cones, and ropes have been staged. Our resident HIM “Hombre” was present marking his return to the gloom. Nothin left to do but go have some fun…Lets Mosey!

Headed to the back of the school and circled up.  No sooner than uttering one acknowledgement of thanks for everyone showing up did Manning start the heckling.  We had a lot planned so we got through a quick warm-o-rama and then split the group of 64 into 2 equally sized teams of 32 (more on that later).

The first challenge was a team run with a tire.  Each team had to hold their tire overhead (or at least over some people’s heads) and run around to the front of the stadium and back.  Pella completed the explanation of the rules and then went to confer with his team. Team Dory selected 4 guys to get under our tire and got to work! However, Team Dory’s lead was short lived as Cricket grabbed the tire and lead Team Pella while dragging 3 others along.  Lots of pax mumblechatter and some pax who clearly had no idea which team they were on.  Team Dory was awarded the first point by getting our entire team, along with the tire, back across the start/finish line.

Next challenge was a last man standing contest.  Each team lines up facing each other for an extended air chair.  Whichever team had the most PAX still in an air chair at the end of 5 minutes get a point.  Team Pella was awarded their first point with Cricket, “shaky legs” Manning, and Westside still gunning at the end.  Honorable mention to Swisher and Brad Pitt for their valiant effort!

Next up was a Baton Death March. Each team had to line up for an Indian Run with the last man dropping for 3 burpees before sprinting to the front of the line.  This one ended up being a little hazardous with both Duggar and Short Circuit taking a tumble. But hey, only small amounts of blood were spilled!  By the time we got to the end the lines had somewhat broken down but Team Dory got to the end first.

Time for some tug-o-war. Both teams quickly split into groups of 3 so we could run heats where everyone would have a chance to be on the rope.  Team Dory came out on top for the first two heats. Team Pella won the 3rd. Decided to run a final heat where each team put their 10 best guys on the rope….winner takes all. Team Dory put a hurtin on Team Pella and was awarded the point.  Best of all is that Hombre was there front and center calling out the start and declaring the winning team each time!

One last round of fun to be had.  As I have since learned…this is one of Garf’s favs (but don’t let him tell you otherwise)!  Both teams lined up for a tunnel of love. First team to get all their guys through a full cycle gets the point. Both teams started off strong. Team Dory started having some directional difficulties midway through but was able to complete the full cycle while it appeared Team Pella got stuck halfway through.  Something about Team Pella having more guys than Team Dory…sounds dubious (where’s the replay?)

Time to head back to the flag with just enough time to get a round of box cutters in before the clock stuck 6:15. With everyone circled up we acknowledged the guys who were posting at the mothership for the first time as well as everyone who had posted at Kodiak over the past 4 years.  We ended with acknowledging Babyface, Bloodhound, C4 and Law Dog who were present at the VERY FIRST Kodiak beatdown on 2/27/2017! Pella politely reminded me that a count off and name-o-rama was in order (duh) so we could get back on track.  And with that, we counted off 73 guys in attendance! Somehow I am reminded of the Field of Dreams quote…”if you build it, they will come”.  In all seriousness, we were happy to have several ruckers join us for COT!

It was such a great morning on so many levels.  From getting to see guys you don’t normally post with, to meeting guys you only know from Slack, along with having Hombre back out in the gloom with us, it was awesome!  Special shout out to Spaceballs for making it possible for Hombre to get out there and stay engaged with all the action!  Additionally, the turnout from all across the region was really humbling.  Your willingness to make the drive from all points west and south for a 45 min beatdown was mind blowing!  This was by far the largest “non-convergence” I have ever attended! Thanks to Westside for use of his battle rope. Thanks to all who brought bacon, bananas, sausage balls, crullers, hot chocolate, and coffee! Both Pella and I were a bit worried about having enough but I don’t think anyone went without.  At least Wafflecone should be set with bananas for the next week or so!  And I cant go without saying thanks to Exile for all the photos.  What was a simple request to bring a camera for a group photo at the end, resulted in some great shots commemorating Garfield’s favorite!

Team Dory won the coveted “golden shovel” that has yet to be seen (something about letting the paint dry…yada yada yada). I cant wait until the “2nd First Annual Kodiak Games” is held in Feb 2022 to see who is next to take home the trophy! Sorry Miyagi….not sorry…had to say it!