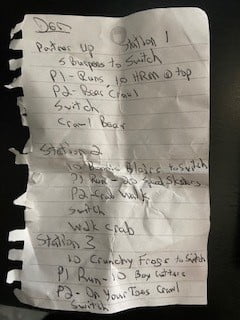 The Lion’s Den always has insane numbers, but they do not have an insane amount of PAX step up to Q especially the newer PAX.  YHC came to the Den to rectify that.

Short mosey, and we circled up for a few warm up exercises.  It was YHC, so I am sure it was merkins and phelps.  YHC then split the massive group in two.  One group was PAX that have been in F3 over two years.  The other was less than 2 years.  The majority of Q’s at the Den come from the older PAX, so YHC had the Q sheet printed out and laid it on the ground in front of the new PAX.  At this time, YHC advised the entire group that we would do Burpee Bonnie Blairs until the new guys filled up the Q sheet for the first quarter of the year.  It took about 5 minutes, but we got 14 Q slots filled with 8 of them being VQ’s.  F3 is an organization of leaders, and we need leaders to step up and Q.  I am thankful that these PAX stepped up especially the VQ’s.

See pic for BD that proceeded.  It went something like that.  Crawl bears up hill really are awful.