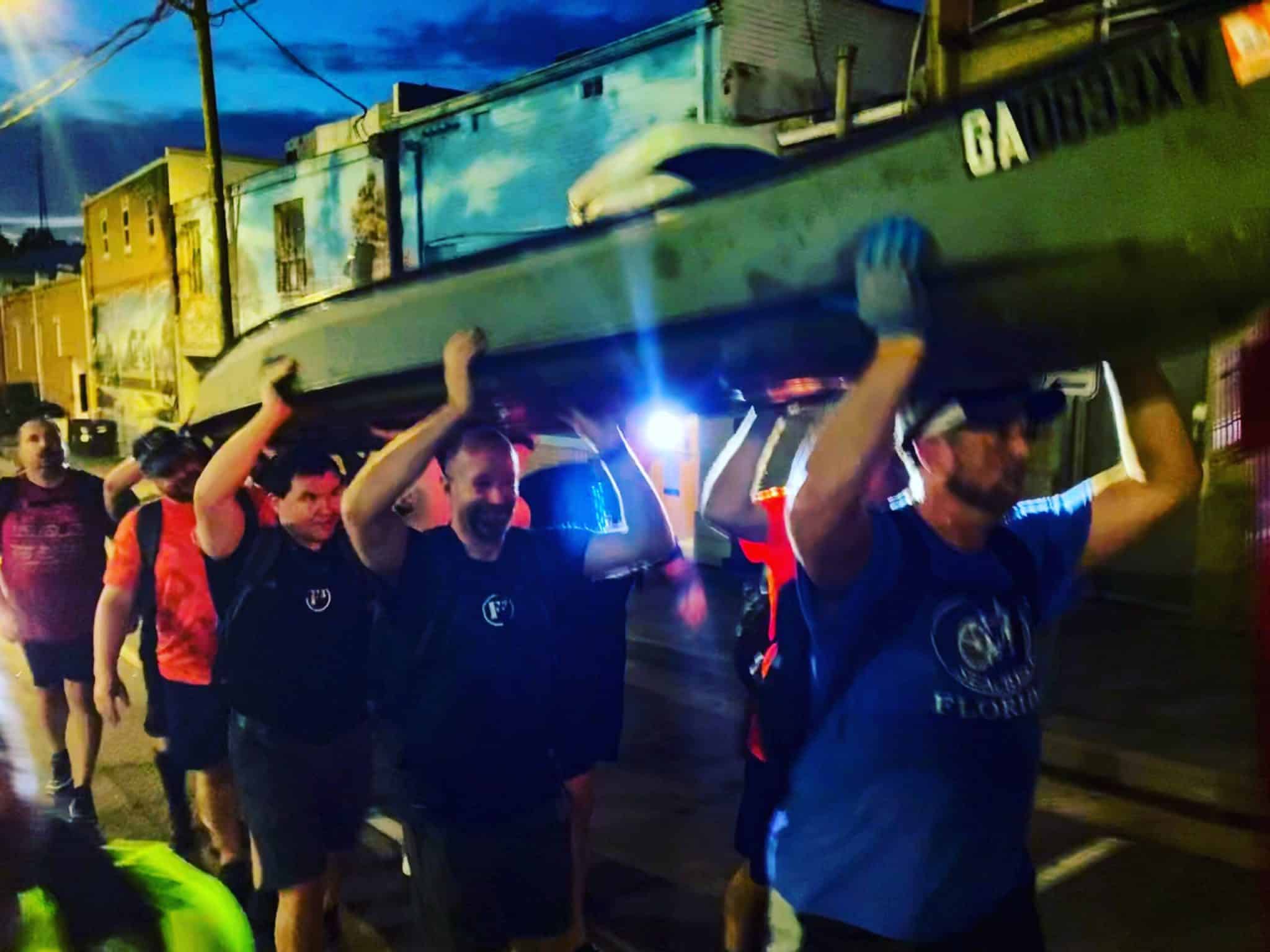 
A bit over the 1 Year Anniversary for the Rattlesnake Riviera so LuckyCharms returned the favor and encouraged me to host a convergence with his Pineapple Express. Man was it great. Started off dropping an evil rucking coupon down at Reformation parking lot then arrived at the Canton Square to discover a pre-runner (Foosball) making some laps who was soon joined by LuckyCharms. Cars kept rolling in, mumblechatter picked up, and YHC had a nice table of treats, cooler full of liquids, and a table top display of the new RR logo (courtesy of Rembrandt).

Split into Runners and Ruckers, and off we go. Runners were heading toward Hasty Elementary and back for their route. Ruckers headed back down North St to Reformation. YHC was sure glad a crew showed up. Upon reaching the back of the parking lot the coupon was located. ~130lb, 15′ fiberglass fishing Gheenoe. PAX flipped said boat over, and probably 10 PAX under for the first carry distance. Up around The Mill driveway then across street to the steep Academy St hill. Quick little breather before we attack the hill. YHC had a handle on the boat for 1/4 of the incline, but all the other HIMs carried it on while Charmin & YHC huffed and puffed our way to the summit. Still some time to burn so we turn right and continue down Archer. At some point PAX decided to low carry with hand grasping sides of boat. YHC can’t remember if it was before Academy summit or after, but it switched. Lots of switching, mumblechatter, and a jaunt over to Dupree St, before sailing on into North St… oh but not before YHC calls for boat to be held above head for final valley, rise distance. Finished a few min before EndEx with enough time to get a photo with boat held high in front of old court house, and drop boat off on trailer waiting in a parking spot. Circle up around the Gazebo for COT.

Great move to relocate AO to downtown Canton. Appreciate all the support from the region on this “moderately paced” rucking BD. YHC is the slowest PAX in the region, and wanted to offer an option for men of similar situation. Little did he know how many amazing moments that small decision would put into motion over a year of commitment. Special thanks to Hooch for building the RR flag, and Hasbro for posting with YHC when YHC was low on enthusiasm & RR was lean on participation. Many other amazing PAX are a big part and I’m grateful for them all. Continuing into year 2 with a full heart.