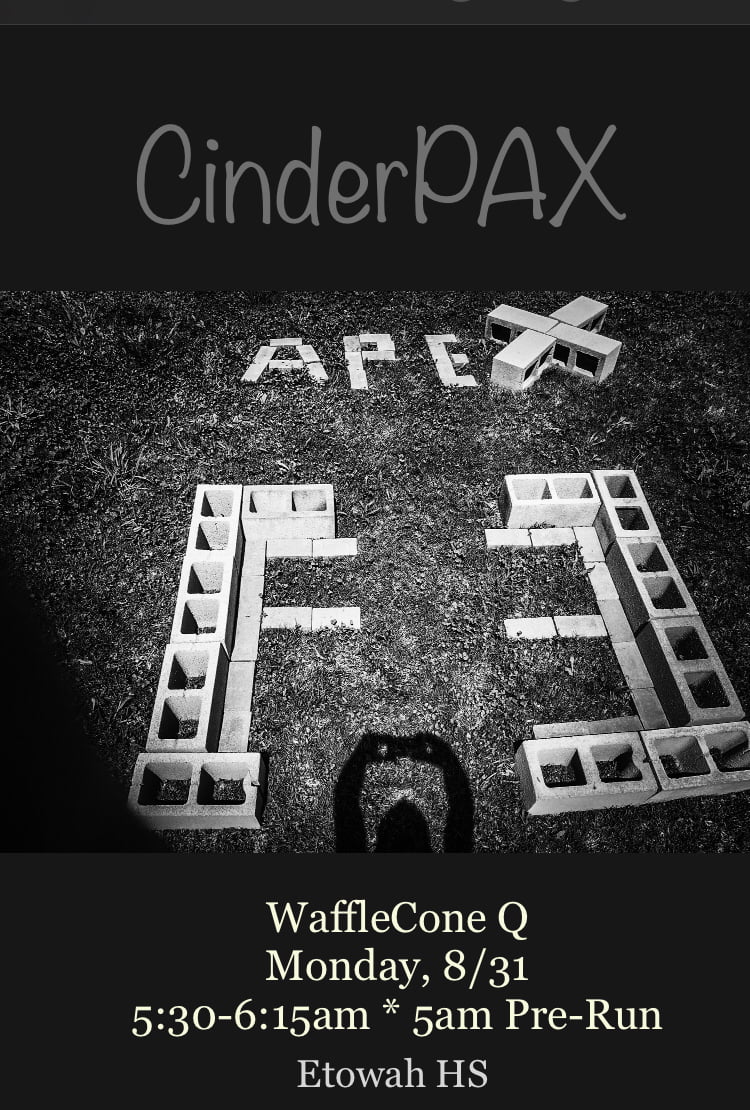 
Intro: YHC wanted to use more of the AO real estate but also keep it on the grass, mostly. Since IronPAX had started, YHC felt the theme could be used but there would just need to be adjustments.  I wanted to make it fair and honest, (like IronPAX reporting) so carefully monitored Twitter for ideas.  Cinder Blocks were going to be a focus and indeed adjustments were needed to be made midway through..  (*See Bobby Hurley counts and dash to return cinder blocks to formation later below.)

Definition of Cinder:  (noun): small piece left after something has burnt. (Goal was that our muscles would be burnt with the hope of them becoming “big pieces” so we could all look like The Situation some day!)

First YHC had the PAX count of into 1’s and 2’s to form teams.

1’s and 2’s then lined up in two lines and then Follow YHC for a little ¼ mile-ish Indian Run to the Coupon station area.

*YHC noted how the CinderBlocks were shaped in a circle around the F3 bricks.  PAX were told that later we would return them this way and stack them vertically once we returned the base circle shape.

YHC had the PAX grab a coupon, (cinder-block,) then partner up with someone from their earlier team.  Each needed their own coupon.  *Social distancing and basic pandemic protocols were in force.

We went over the WhiteBoard instructions and reviewed the “sort of drawn to scale” map, YHC explained the 5 stations and 1/4 mile run.

1st Partner is the Timer while the 2nd Partner starts the Exercise at Station 1.  The switch occurred when 1st Partner finished the Timer activity, (traveling from current station to the next and back) .  Then they continued the Exercise count with their own coupon and the 2nd Partner became the Timer until the number of exercises at the station was complete and so on.. Once the Partners completed their reps they each carried their own Cinder blocks, moseyed ahead down coupon lanes to the next station to start the Timer tasks and Exercise assigned to that station.  They would do this all the way to Station 5.  At the completion of Station 5, 1 Partner Runs the 1/4 mile loop the other picks up the 6th on their team.  We all then get back to Station 5 and do it in reverse, returning coupons after completing Station 1.  Once that is done it is a race between Team 1 and 2 to return the cinder blocks to their original formation around the F3 bricks.

COT: Prayers for Scamper, his M & family as well as StopWatch, his M and family battling the Covid issues/positive tests.  Other mentioned and unmentioned prayers and thanks to God that we are able to get out and do what we do in the Gloom.

YHC had completely planned to do the typically well attended “pre-run” prior to the Q BD but despite BradyBunch and Maaco taking off at 0500 towards Walmart and mentions by YHC of “I’ll catch up with you”   YHC was behind after moving 26 cinders and 16 brinks earlier and realized more cones where needed on the grass.  So texted them both that there would only be two on the Pre-Run this day.  Gotta have more cons! So more went out and YHC met the incoming PAX to be ready to Mosey up the small hill to the grass for the Warm-O-Rama.

Somehow YHC got in the 1st few with reasonable instructions but at the High Knees the idea of doing so in cadence got messy and we ended with 14 and a half somehow.  I felt bad for cheating Chancellor out of the ½ high knee but since he is a reasonable guy, we moved on..

Q’s and backblast should follow the K.I.S.S method and I am obviously slowly learning this..  After a nice 1/4  mile mosey, the PAX circled up around the F3 shaped fire pit looking structure I had assembled on the grass and listened up to the instructions.  They tried their best to interpret the map with numbers and arrows of the middle school I had created. I intended the multi colors on the whiteboard to be helpful.  Maybe they were not..

The PAX were partnered up and the dove into the plan, Cinder Blocks close by through most of the stations.  Our numbers were odd, so YHC did the stations solo and reminded PA what exercise was next and to remember their Cinder blocks once they advanced.  At Station 3 YHC realized, (and was told) that 300 Bobby Hurley’s is a lot.  So, YHC picked up the 6th across the line to help get the group to the 300 and move up to Station 4.   It was about that point knowing we had 15 mins left to the BD that YHC knew we were not making it down the station list to get back in time. So an audible was called by YHC that after the 1/4  mile loop was done and 6th picked up we would modify the climb back to the starting point.

*Station 4 was to be repeated with 2 hundred flutter kicks and coupon overhead and then Team 1 and Team 2 would run back to return their Cinder Blocks to the original formation in the grass with the 1st team to complete the winner.

YHC led Team 1 and is sure that Team 2 got all their Cinder Blocks back 1st.  However, YHC noticed Rubberneck may have not properly placed his Cinder Block on the formation.  There may have actually been a tie to completion of the CinderPAX challenge between Team 1 and Team 2 that day.  YHC is constantly monitoring Twitter, checking with advisors at F3 Greenwood and watching all the latest dance videos from F3VHS to get a baseline and confirmation on this uncertainty.

Mosey back to the Flag, a little Marry pre COT and then prayers / praises prior to some Coffeeteria.   The Apex and the men at the Apex are an awesome combination!  I appreciate everyone playing along and the help with the cone and coupon collection at the end that only took 30 mins.

The next Q from YHC will absolutely be set using the K.I.S.S. method.  So I just need to sign up on the Q sheet again so I can work on that…