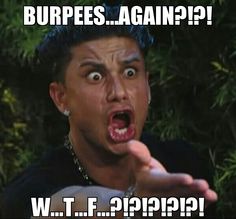 We warmed up in the typical manner with a slow mosey, SSHs, weedpickers (yea!), copperhead merkins, and Sun gods (in cadence) to get those shoulders all limbered up.

In the interest of March Merkin Madness, we did a series of 4 exercises capped off with a 20 merkins/derkins at the conclusion of each set.  Each set was followed by a 1/4 mile lap.  We nearly made it through this routine twice, before the Q was too merkin’d out to continue.  Then it got worse.  Inspired by Cookies N’ Cream’s example, the PAX proceed to do a set of 11s with burpees at one end and…..more burpees at the other end.  During the second round, the guy next to the Q started snarling “Chubbs is my enemy” with every burpee.

It was fun for all.  And we did more than 3400 merkins as a group this morning (yep, we counted).  How’s THAT for madness.

ANNOUCEMENTS: Ice-T was evidently fired as site Q and gave the flag to the new site Q, Roscoe P.  This was greeted with a cautious optimism about the future of THD. (In reality, Ice-T has done a fantastic job.  When you have to manage the questionable attitudes of a group the size of THD, it requires a lot of patience.  And coffee.)