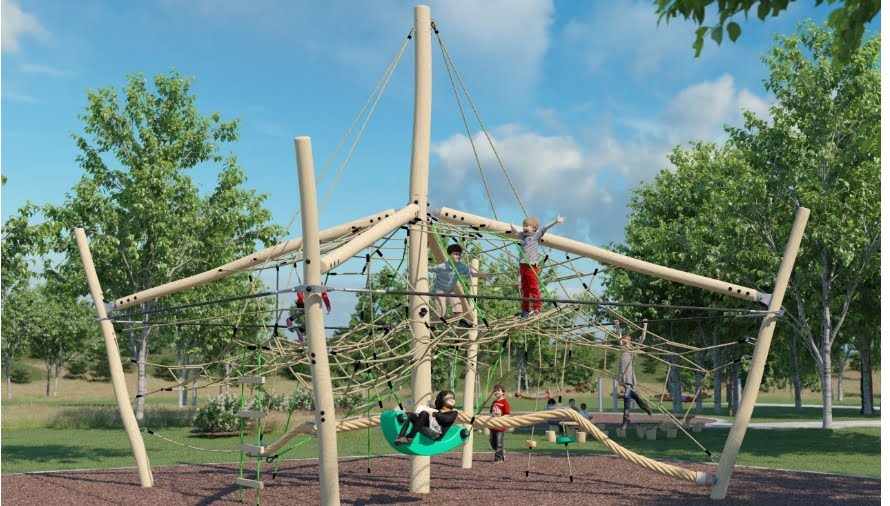 Working in secret with the Site Q for Vineyard we decided to converge and celebrate the opening of the new downtown Woodstock Park in true F3 style which means by doing something completely stupid and utterly pointless!

Moseyed the Clinic boys up to the Woodstock green space where the Vineyard boys greeted us like Seal Team Six on Osama.

Split the group into 2 teams (Red vs. Blue) to begin the morning. Time for the first event.

The PAX lined up behind their respective cones. This event was 1v1 with each PAX beginning on their stomachs. On the command ‘GO’ they would sprint to a cone 10-meters away and then back returning to the position on their stomachs and would clap their hands behind their back and then sprint again. PAX did this 3x and then finished with a dead sprint to a Sandbag at the other end of the green space.

PAX lined up by team at the starting point. On the command ‘GO’ the PAX would run holding the sandbag over the turf mountain to the other side of the concrete and back. Once back they would hand off the sandbag to the next PAX in line relay-style. The first team to complete wins.

P.S. this thing straight up shredded our shins if you weren’t careful enough. Many have battle scars

The Last Bear Up w/ Coupon

PAX lined up around the web playground and took a position under the black rope. On the command ‘GO’ the PAX would put their feet on the webbing and then ‘pull’ themselves up to the downward Merkin position. Last PAX standing wins for their team.

Great morning men! Really glad it all was able to work out and there is still so much potential at this playground. The lighting is amazing and should definitely be used again in the future. Big thank you to BoSox for converging with us this morning. Squirtle had some great words in the COT and promoted a new shirt design for a fundraiser for F3. LizardKing topped it all off with some #marketplace live items that he was giving away including several bike racks.

The men of F3 never fail to surprise me and the support is never ending. I appreciate each and every one of you. I look forward to the many months ahead with you all.