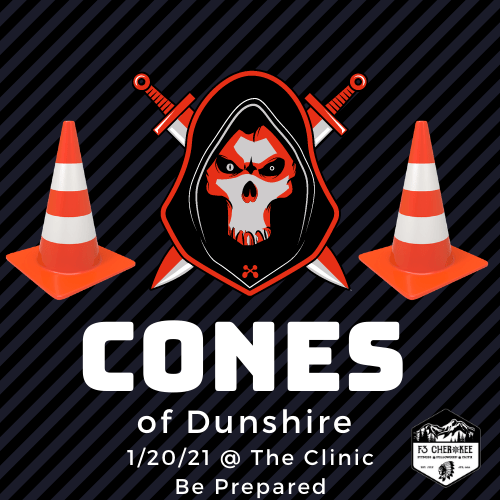 Cones of Dunshire 2.0.  Started with a mozy from the flag to upper parking lot atop the stairs.  Warmups included, in cadence, 20 Side Straddle Hops, 20 Imperial Walkers, 6 slow Weed Pickers, Sun Gods on your own, and 5 Burpees on your own.

The PAX mozied to the amphitheater and began playing the “Cones of Dunshire.”  The PAX split into 5 groups, or parties, and were dared to share an intimate high in their life right now, an intimate low in their life right now, and a specific prayer request. Five stations were marked by a set of two cones.  Twenty exercises were listed on a white board and a twenty sided dice was used to pick the exercise.  The reps were determined by a 100 sided dice (one percentile dice and one 10 sided dice).  Parties were instructed to start at their respective stations and began with 67 Monkey Humpers.  Once the exercises were complete the party would bear crawl to the next station and a new exercise and reps were rolled.

The Pax ended in a Mary which included 10 box cutters, 10 merkins, and 10 flutter kicks.

We also prayed for our nation as today is Inauguration Day.