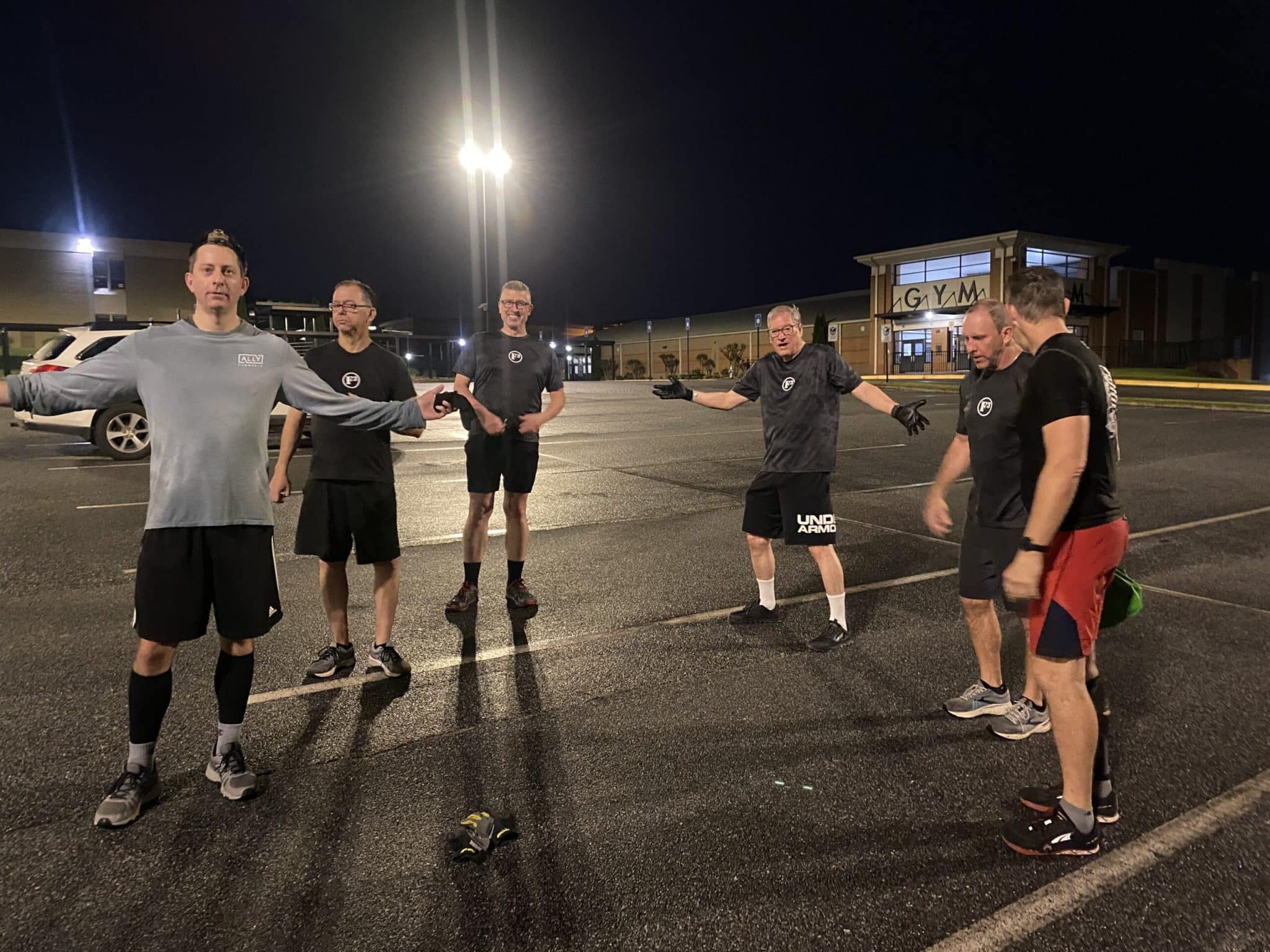 
I pulled into the parking lot and circled for what seemed like 30 minutes looking forward the flag.  Good thing I was early.  Never found it, but did find a group of other PAX standing around equally dismayed.  Old Glory wasn’t waving in the wind today, pushing us on to be greater men.  So we had to find it within ourselves to get on with the BD anyway.  Even though we were missing the guys who were bringing the coffee, surely they were just running late because they had setup a special brew for us this morning and wanted to make sure that today’s coffeeteria was one to remember.

Over to the coupon area and warmed up with a new movement I like to call “the 5 burpees”.  Followed by SSHs and Weedpickers.

Then we grabbed coupons and moved over close to where the 0.0 BD was also happening so that we could each look at each other periodically and silently communicate how glorious this post BD coffeeteria was going to be.

Everyone grabbed a coupon and moseyed to the parking lot by the middle school gym.  I would call it the parking lot without the flag, but that wouldn’t have really narrowed it down today.

Then we started working our way through a pyramid of pain:

My favorite part was the excitement building as I made the turn back towards the high school on each lap and thought, “those Site Qs, sacrificing their own physical well-being so that we could have amazing coffee today.  What a couple of HIMs.  Can’t wait to see them!”

YHC called it with about 2 mins left on the clock and we stashed the coupons.  Then we circled up for some T-Bombs (because what is a High Dive Q without T-Bombs?).

Now I’m starting to get a little nervous.  Still no sign of those HIMs bringing the coffee.  But, they know that YHC is a talker and COT will probably run a couple of minutes longer than usual.  So I’m not too worried.

Fire Sale was our 6th man.  Apparently he sells a ton of stuff on FB marketplace, but not his contraband.  He sells that on another market.

Exile reminded everyone of the Q School coming up on May 8.  Sounds like it’s going to be a really good session with guidance not only on how to lead a BD, but how to become better leaders in outside of the BD as well.

Several PAX shared prayer requests about decisions and milestones coming up in their lives.  Then we prayed.

And then the full bitterness of my disappointment set in as I realized that coffee wasn’t coming.  We were wet and cold, with no one to comfort and console us with a warm cup of Joe.  Snot Rocket had some coffee that was several days old just floating around in his car – he offered to share but I don’t need any more hair on my chest.  Waffle Cone had a solitary bottle of water that he brought out to mock us with as he quenched his own thirst while the rest of us resorted to lapping up the morning’s misty moisture from the pavement – in the parking lot closest to the high school, not the one with the flag, because…