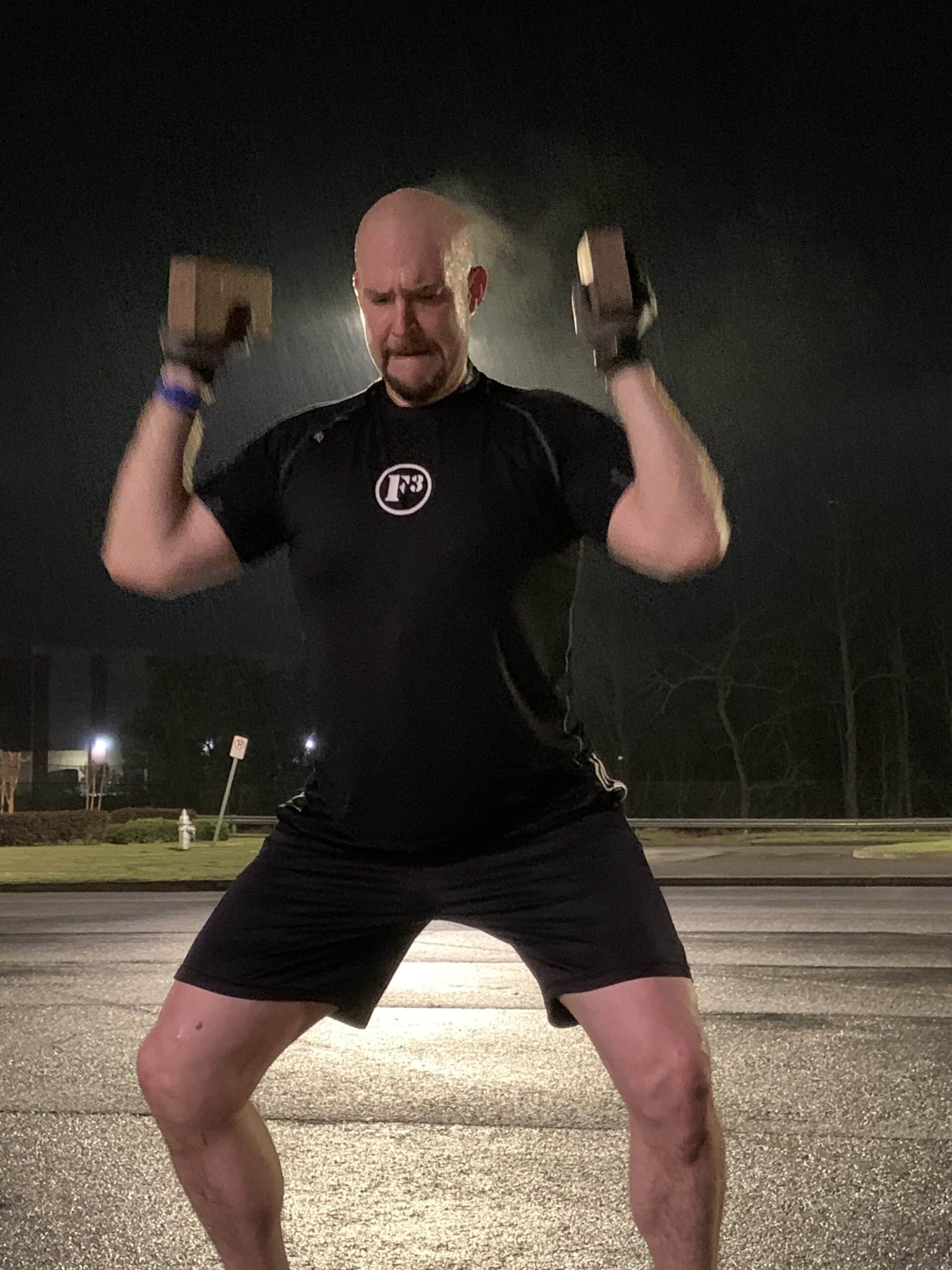 
I had been on the DL for 3 weeks, and this was my first Beatdown back and my first Q in a while.  Felt so good to come back after 21 days  of Beatdown fasting! Coming up with a modifiable workout was more difficult than I expected.  It was kinda like my VQ, oh so long ago. In fact, fumbling through the warm-a-Rama was humbling. I couldn’t remember what exercise was what or how to count. It was ridiculous. Such a noob!!

Anywh0, some of us recovering walked to where the coupons are. Those who wanted to mosey were told to run around 1/2 of the parking lot and meet at the coupons.  Being the individual non-direction following PAX that some are, they ran around the whole parking lot. Except Chancelor, he was an obedient citizen and followed instruction.  We did a brief warm-up. Something about Imperial Walkers, or Toy soldiers… I don’t know, can’t remember.

Everyone grabbed a cinder block and two bricks, yup, we were ready to work! We did a tabata style workout: 60 seconds of exercise, 15 second rest, then 60 seconds for someone to call out a random exercise and then start again.  Some of the exercises were devastating. They went like this: rifle-carry/no-surrenders, elevated side-to-side merkins (right hand on coupon, both on, left on – back and forth), arms out/lunge kick (a brick in each hand stretched out at the sides), air chair/overhead press (just as it sounds), elevated side-to-side squats with overhead claps (alternating feet on the coupon while squatting and the claps), and last but not least, step up curls (at the curb do curls while stepping up and down on curb).  Can you guess which ones were the worse?

These were modifiable to do with or without the coupons for weight, and there was intentionally no running for those of us in recovery mode.  I still feel like the workout was pretty tough, and I could feel the swearing silently thrown at me.  I am excited for The Situation’s eagerness to start up a separate Beatdown for those recovering. As one who was MIA for 3 weeks, it can get lonely and easily fall away from the fellowship. If you are injured or have some limitations, hit up the Sitch or come by the Apex and participate as much as you can. Or just come out for the COT – its pretty awesome!