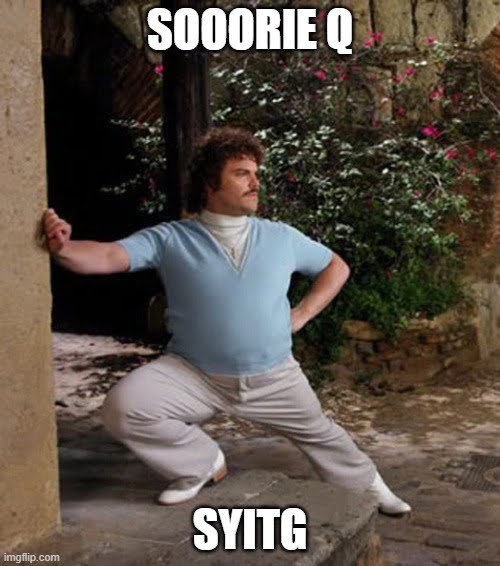 Sooorie has a calendar reminder to sign up for Q’s every month.  A vision is nay with out action, and sooorie has a trash memory.  After his visit to the men of Radio Silence, his calendar reminded him of his Q for the armory, although destiny had different plans.  It was availed that pitchfork was Q, and Sooorie had signed up for THE BLACKTOP!

While this kind of mistake would normally be swept under the rug, it isn’t like Sooorie to sign up for a Q to an AO that he hasn’t even visited.  For that he apologied.  What he wasn’t sooorie for, were the GAINZ!

Quick mosey to get the lay of the land

The normal good stuff, Side saddles, Weed pickers, a prolonged arm circles (at the grumbling of the PAX), and the Dancing Flamingo.  The men of Blacktop lack balance.  Sooorie will aim to fix this.

Being in a church parking lot, Sooorie was pleasantly surprised to find many opportunities to strengthen the PAX of the Blacktop.  The first anvil, was MT. Kilmosomething.  Sooorie promised he would remember how to pronounce it, but that too was a lie.  Nevertheless, Sooories summer of Sprints and Speeedos placed NO limitation on hills.  So, therefore, we sought the proper place to become stronger.

SPRINTS!!!!  Three rounds, 3 lights, as fast as you can.
The fourth round we sought to benefit from the work done before us.  From the bottom to the top, everything they had, pain, and gainz baby!!!

After Trill tried to laydown and go to sleep, we awoke him from such nonsense and we walked/moseied to start moving some Lactic acid from the quads and hamstrings, and a suttle excuse to get more miles for those gazells.

To the coupons, and to the red cone.

With coupon in hand, shrugs-rest

While good, if Sooorie could do it over again, he would have added 10 seconds of push press to the end of each 30-second effort.  Good thing there are no limitations on Qing the blacktop, and redemption is his for the taking.

Traps blasted, we took our coupons back and finally-

Bear crawls and parking spaces
Bear crawl the length of one parking spot to the next, 3 merkins, repeat until time.
Trill was reminded that Standards are a good thing, with a sudden jolt of inspiration, we witness a glimmer of the HIM he will become.

Prayers for not a lighter load but the strength to carry out our burdens.
Be it fortune, happenstance, or the rare occurrence of a Sooorie Q, we summoned 12 PAX to the blacktop.  Whatever the reason, cafeteria and Brad Pitts elixir of life was enjoyed for nearly 45 minutes.  For that, Sooorie was thankful.