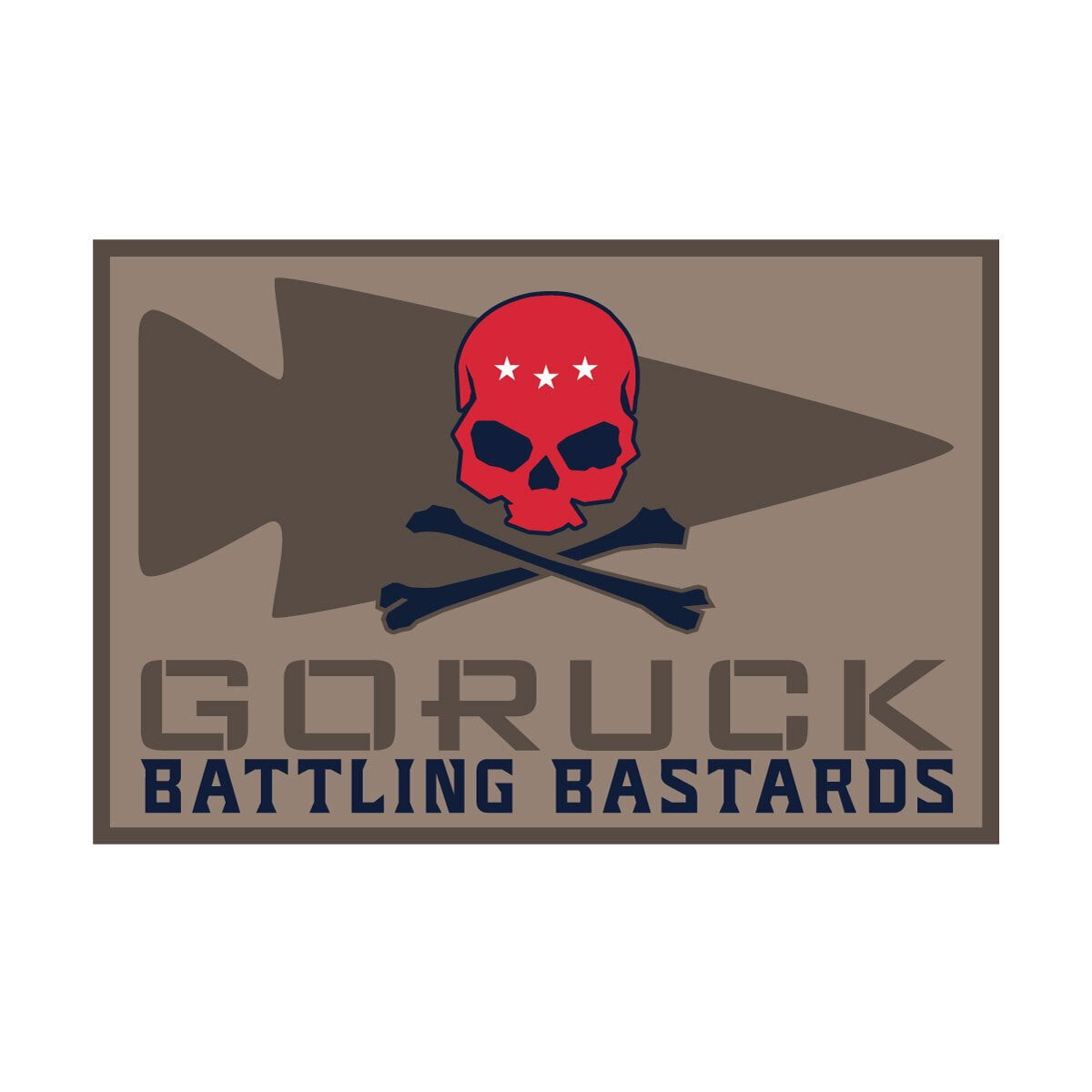 Immediately after PH attack, the Japanese commenced a campaign of siezing the Phillipine Islands which was a strategic position for control of SE Asia. The archipeligo was defended by roughly 150K US/Filipino troops under the command of General MacArthur. As MacArthur planned his defense strategy of the islands, he abandoned “War Plan Orange” which concentrated troops at Manila Bay and the entire archipelego coast. Though seen at the time as a way to immediately save lives from the impending Japanese attackes, it ultimately resulted in the defeat of Philipino/US troops. On Dec. 22, 1941 the Japanese mounted their main attack on the islands. The remaining defenders withdrew into the Bataan Peninsula that extended into Manila Bay and thus began the Battle of Bataan over the first week of January 1942. On March 11, 1942, General MacArthur left Manila, promising his troops he would return. The soldiers remaining, now known as the “Battling Bastards” hung on for one more month. Their fight was immortalized in a limerick created by american journalist and war correspondent Frank Hewlett:

“We’re the battling bastards of Bataan

No mama, no papa, no Uncle Sam

No aunts, no uncles, no cousins, no neices

No pills, no planes, no artileery pieces,

And nobody gives a damn!”

On April 9, the Battle of Bataan came to a close after almost 4 months of continued fighting in the harshest of conditions with very limited supply of food and ammo. However grueling their efforts were in defending Bataan it would be incomparable to being Japanese POW’s. The Japanese anticipated winning the fight in the Philipines and transporting ~30K men to the POW camp. However 76K men surrendered and the Japanese were ill prepared in taking care of that many prisoners. During negotiations, Major General King asked for permission to drive the POW’s to Camp O’Donnell in American Army trucks, but General Masaharu Homma dismissed this request and it was decided the prisoners would march on foot.

Goal was to get at least 10 miles before picking up the WR guys at 0500. Along the way we read the following story:

Tenney was tank commander with the 192nd Tank Battalion when the troops surrendered to the Japanese at the Battle of Bataan in April 1942. “Number one, we had no food or water,” said Tenney. “Number two, you just kept walking the best way you could. It wasn’t a march. It was a trudge. . . . Most of the men were sick, they had dysentery, they had malaria, they had a gunshot wound.” Their Japanese captors showed no mercy for the ill or wounded, Tenney said. “A man would fall down and they would holler at him to get up,” he added. “I saw a case where they didn’t even holler at him. The man fell down, the Japanese took a bayonet and put it in him. I mean, two seconds.”

At 0500 we picked up the following PAX (Maaco, Hass, 8Bit, Gambler, Fire Sale, and Village People) and had to drop off Bonilla due to an injury. Not to be deterred, Bonilla made up for the mileage later on that day! Way to go!

Before we took off, we read the following story:

When word got back to Bollich and his outfit that the Japanese had made a major landing about 35 miles from where they were, they were instructed to quickly pack-up and told that they would be evacuated, by boat, from Manila to the Bataan Peninsula across Manila Bay. Thousands of American and Filipino troops now occupied the Bataan Peninsula, leaving the U.S. Army responsible for feeding everyone. In the meantime the Japanese controlled the surrounding seas and skies, making it difficult for American support to resupply these men. “We were running out of food,” Bollich said frankly. “That’s when we tried to get extra food by going up into the mountains. People ate monkeys, snakes, lizards, just about anything that they could find.” When most food sources were exhausted, including mules, “essentially what we were living on was a slice of bread made out of rice flour, covered with gravy made out of water and rice flour. We were essentially starving to death and weren’t in any shape to fight and the Japanese easily broke through our front lines,” he said. When their front lines did eventually break, they were ordered to retreat to the tip of the Bataan Peninsula, where they eventually surrendered to the Japanese. “We had no idea what was ahead,” said Bollich. “I’ll never forget our old first sergeant, when the surrender came he said, ‘we survived the war, the Japanese are going to take us and put us in a prison camp. We’ll get fed, have water and rest and just sit and wait out the war.’ That guy was dead within three weeks after we were captured. It didn’t turn out that way at all.” Bollich recalled marching out of the peninsula with Japanese guards on either side of the line of prisoners. “They took our wallets, anybody who had a ring they took those, took our dog tags. Then they began to beat us. They beat us with rifle butts, sabers, clubs, anything they could get their hands on. That went on all day long. They wouldn’t let anybody have a drink of water or let us rest and they didn’t feed us. “And then I think it was around the middle of the second day that people began to collapse. We hadn’t had water in a day and a half and in the tropics it’s almost beyond what you can take. And of course once anybody collapsed, the Japanese immediately killed them, it looked like they were really trying to kill us all.” Upon arrival at the first prison camp, Camp O’Donnell, Bollich said the soldiers were met by the general who had called for their surrender. General King spoke in front of the crowd, assuring his men that he would take full responsibility for the surrender and for his troops not to feel bad. “Then the Japanese commander got up and laid down the rules of the camp,” said Bollich. “He said that if any were broken, the person would be shot, which are words we expected to hear. But he was speaking through an interpreter and the interpreter said that you have come here to die. At first I didn’t believe it and that he’d misquoted the Japanese commander, but it didn’t take us long to realize that he was telling the truth.” Bollich admitted that the exact number of Americans who died on the march remains unknown, but is estimated anywhere between 800 to 2,000 troops. However, Bollich is sure of the death toll of the first 40 days of being in Camp O’Donnell, because he witnessed it. His best estimate is approximately another 1,800 Americans in that time period, averaging about 45 per day. “All we were doing was burying the dead,” remembered Bollich. “I remember looking around and deciding that the way people were dying that within a few weeks we would all be dead. Our food was nothing but a handful of cooked rice a day. The barracks we stayed in were made out of bamboo with thatched roofs, no doors or windows. At night the mosquitos would chew us alive and during the day time the flies would get all over us. The big killer was dysentery. They had open latrines that had flies by the billions, covering our camp. Once you caught dysentery you were gone.” Bollich recalled that within the first four weeks of confinement at Camp O’Donnell, three men escaped to find food and were caught trying to sneak back into the camp. For breaking the rules, the men were tortured for days until all the prisoners were called out to an area in the camp where the three men had dug their own graves and witnessed each man get executed.

We had to run a few minutes over to get the mileage but we did it. Unfortunately Porkchop had to drop almost at the end due to some obnoxious blisters forming. Closed the ruck out with this final story:

Mims lied about his age to enlist in the Army in 1938. He had heard that being in the military was an easy job and the men ate well. The Great Depression had ended, but he said there was still “no food at home.” After making it through basic training, Mims spent 11 months on active duty in Oregon before Army officials realized he was underage and discharged him from duty. In April 1941, he re-enlisted. At 17, he was still too young, but said the Army took him anyway and shipped him off to Manila in the Philippines. “We hadn’t even taken basic training, so we did our basic training there in Fort William McKinley,” he said. That November, Mims turned 18 and a month later the Japanese bombed Pearl Harbor. Controlling all the Western Pacific except the Philippines, the Japanese began attacks on Corregidor Island and the Bataan Peninsula where Mims was stationed in April of 1942. “They harassed us 25 hours a day. It was like people screaming at you 25 hours a day,” said Mims, shifting in his folding chair on the canal trail. “I can still hear them hollering.” At the beginning of the march, Mims said a Japanese sergeant hit him across the face with a glass soda bottle and knocked his bottom teeth out. “He dropped the bottle and I picked it up, but I didn’t bow to him,” Mims said. Because the Japanese supplied such little food and water, Filipino civilians tried to sneak up to the road and throw food to the prisoners. If caught by the Japanese, Mims said they were either shot or beheaded by bayonet. Through those civilians, he snuck messages about the march to Juanita (his girlfriend at the time), who alerted American forces on a hidden shortwave radio. One by one, Mims watched his fellow soldiers succumb to exhaustion, dehydration and malnutrition. Those who fell behind were killed. “Whatever we got you could have fit in your hand,” he said, of the amount of food he had through the duration of the march; as for water, maybe a half dozen spoonfuls. He was too weak to work when he reached Camp O’Donnell, and Mims’s captors beat him and hung him from a yard rail. “My feet wouldn’t touch the cement and my hands were tied behind my back. My neck broke in three places, but the good Lord spared me,” he said. At Camp O’Donnell, Mims said a doctor nursed him back to health; even found him a job at Clark Field, a prisoner-of-war detail where he was forced to dig mass graves for the American and Filipino soldiers and civilians. But at least he was being fed. When he regained enough strength, Mims said he tried to escape, but the Japanese caught him and broke both of his legs with a bulldozer. After recovering, Mims was sent to work in a coal mine on an island near Japan, traveling by a “hell ship.” Of the 3,000 prisoners who left, only 500 survived. He was there when Japan surrendered in August 1945, setting the prisoners free to fend for themselves until they could be collected by American forces. Mims maintains he lived for two reasons – he could speak Japanese and he felt someone had to live to tell the world about it. “Fortunately, the good Lord loved some of us, but He took a lot of my buddies,” he said.