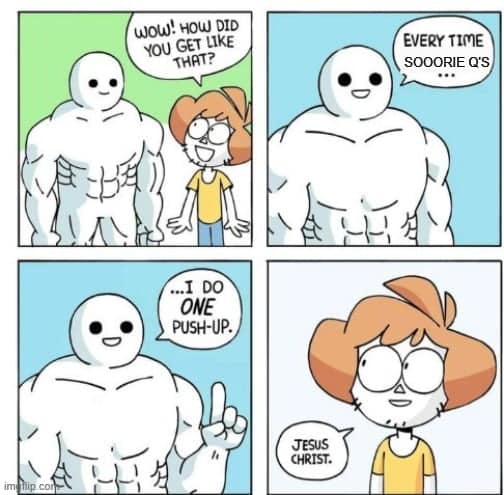 Mosey to the coupons
We did warm up things

Sooorie loves to test and retest.  How does one know they are accelerating?  The definition of acceleration mandates knowing the starting distance, and the final distance.  We went over proper Merkin form- how to hold each other accountable for such standards- and tested our capacity.

Followed by- 7 minutes in heaven
Holding the high plank for 7 minutes.  Each minute we did 5 merkins. For each pax who failed to maintain form or faultered, we did Rifle carriers with the cinder blocks.
Hint- nobody made it- we did alot of rifle carries.

Prayers for all men, the return of Canoe, health and strength.

FNG- We named Shart Tank after his former military name- Poop.  Either crapping ones self is a right of passage, or it happens for more often than many of us remember it.  Shart tank told us a story of when he did a PT test in the military and instead of stopping just moved his shorts aside and, sharted.  We are a creative bunch.