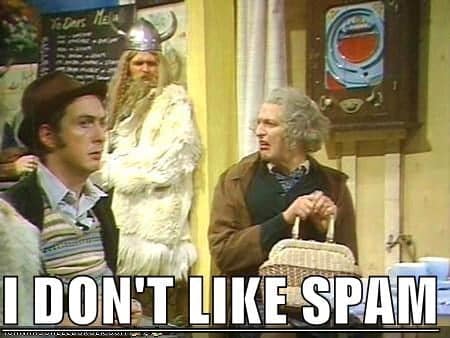 Over the weekend YHC found a beatdown called S.P.A.M.S on the F3 Memphis site. It’s a Monty Python themed variation of B.O.M.B.S.  Change some of the ingredients and up the quantities a bit and you have the recipe for a workout that’s fit for the PAX at the Den.  The fact that this week’s pre-blast was Python themed was a nice bonus.

Mosey to the lower lot where YHC for the F3 Introduction, disclaimer and the following:

Mosey to the bus lanes where YHC explained the Thang.  PAX partner up for encouragement. Each PAX performs the exercises in order, stopping after 25 reps to do a “Silly Walk” out and back in their bus lane.  The type of walk is indicated in the parentheses.

The PAX got right to the job and made quick work of the S, P, and the A. Along the way several men found some bang snaps leftover from a 4th of July celebration and used them to encourage the PAX around them.  YHC changed the recipe as needed and called some audibles. The first, reducing the number of Merkins to 150 due to time, the second due to increased mubblechatter about combining Merkins and Sideways Bear Crawls.  * The Bear Crawls and The Short lap were replaced with sprints out and back in the bus lanes.  With 15 seconds left we moseyed back to the flag.

Welcome FNGs Paparazzi and SueEllen.  Thanks Hurley for making the trip down to the Den. We asked the Sky Q for prayers of the family of Fleetwood’s work friend that recently passed away, for Squirtle’s friend who has lost his way, for Ice T’s mother-in-law and for Chops’ 2.0.

NAKED MAN MOLESKIN:
It’s always a pleasure being out in the gloom with the Lions Den PAX. Hard working with a great sense of humor.