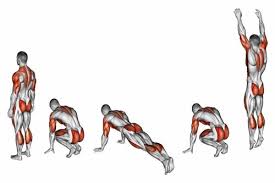 Warm-o-Rama: We ran up the stairs to the upper parking lot, where we got the necessities out of the way.  Side Straddle Hops, Weed Pickers, Joe DiMaggio’s and Sun Gods.  Then we ran back to the stage where the crew paired up.

The Thang!  @Barbosa is recovering from an injury so he rucked while the rest of us paired up to do some 12 Burpees for Christmas.  One partner stayed on the stage to do the exercises on the list, while the other partner ran to the top of the stairs to do 1 burpee. Each time the pax ran to the top of the stairs the number of burpees increased.  So when the partner ran up, he did two burpees, then three, etc. The first Pax always did an odd number of burpees and the second always did an even number of burpees, until they reached 12 and then they decreased by 1 until time.

The pax that remained on the stage worked through the following exervices until his partner returned and picked up where his partner left off.  So the exercises were cumulative between the two guys.

With 5 minutes left to the workout, we ran to the wall in the audience to bang out 100 Merkins.  When the first Pax finished, he was to pick up the six.

We shared prayer requests, information about the AT Race coming up in February and the convergence on NY Eve.  The rain started coming just after the prayer.  Perfect timing.