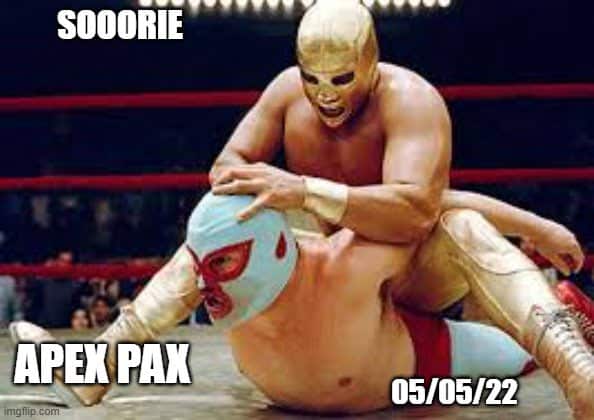 With Sooories recent adventures to Canton, his regular participation with his bois at the APEX has been scarce.  The entire community has been impacted by this event in one way or another.  His return was celebrated on the Cinco De Mayo, and appropriately might we add.

The warm up included the transport of the sandbags and ruck sacks, some light jogging, the Mission and Principles (as it always should), some side straddle hops, slow weed pickers, merkins and such.

After- a 2 mile run for time was prescribed.  For those who were injured (such as Sooorie) 60-80 lb sand bags and rucks were provided to said PAX.  As Gizeles do, they took off, leaving the turtles to work on their final transformation.

With Grace and power, the APEX pax completed their 2 mile run, only to be given the opportunity to do Merkins/Carolina Dry docks, squats and to run the hills with sand bags for the remainder time.

Bacon bits brought a FNG, which we named Freebird.  His hospital name is Journey, he comes from a hippie family (self proclaimed), has a number of random tattoos, which include a duck, and the name of his X girlfriend (with a VOID stamp over it).  Fun fact is that he is always going commando (which made the pax in the COT blush), and on day drank too much at a Buffalo wild wings, only to realize he defecated himself.  With the lack of underwear to keep it all together, it was a mess.  It was between EtichASketch and Freebird.  Sooorie and the PAX overwhelmingly embraced Freebird to the crew.