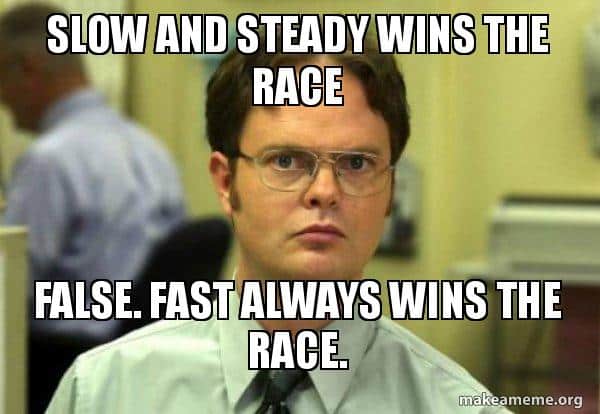 We were graced with an amazing day for a beat down. Not only did we have an eclipse, but it’s Election Day which means more PAX. That is unless you are Bunny Slope or Night Shade enjoying the fart sack.

We started with a short mosey then began the WOR. SSH, Weed Pickers, Windmills, Sun Gods, and Michael Phelps.

We then moseyed to the entrance to start the Thang. We divided into 3 team with 4 PAX each. Today’s theme was team accountability. YHC came prepared to put on a series of relay races.

One PAX per team Bernie Sanders to the other end of the island and back.

While waiting the rest of the PAX did 10 Dry Docks & 20 LBCs (rinse and repeat).

We moseyed to the first intersection to move onto the next race.

First PAX per team ran to the 125 yd cone did 2 burpees and ran back.

Next PAX ran to the 65 yd cone did 6 burpees and ran back.

Last PAX ran to the 35 yd cone did 8 burpees and ran back.

We moseyed back to the entrance for the next race.

For this race each PAX would have to bear hold crawl to the other end of the island. This is different from a Bear Crawl in that your knees should stay about 2-4” off the grown.

We moseyed back to the parking lot at the club house for the next race.

While waiting the rest of the PAX held a plank.

We then moseyed for the last race to the cul-de-sac behind the playground.

YHC was trying something new here, kind of pulling from some of the strongman stuff. What better way to incorporate something F3 into it? At first, I thought about attaching a 2.5 lb weight to the end of a shovel. However, the natural motion of a shovel quickly proved too much for a weak zip tie to hold. (Tried it before asking others to do it) So plans changed, the shovel was to be held straight out from the end of the handle with both hands together and a 2.5 lb weight placed on the spade head.

This became quite the challenge.

We then moseyed back to the flag for a few minutes of a Wax-on led stretch before COT.

Then PAX enjoyed coffee courtesy of Boondock, per usual.

WE WERE JOINED BY 2.0 NOT ON SLACK KETCHUP