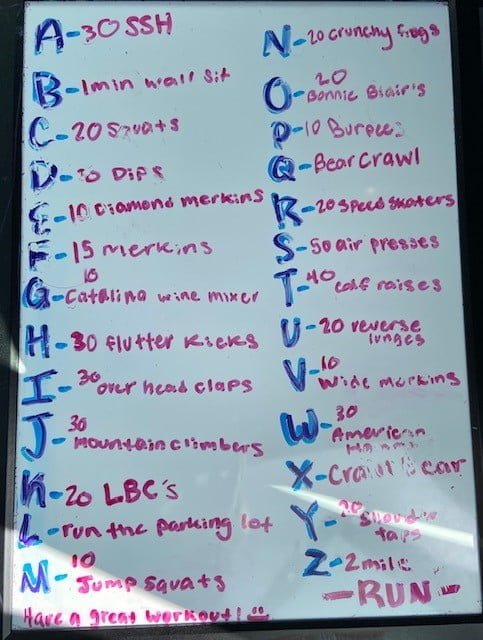 I wanted to create a way to show appreciation for the QIC that named each PAX, so I utilized the Alphabet Board.

The PAX lined up 6 feet apart, and each PAX called out the exercise for each letter of his F3 name individually, and we performed that exercise.  Once we were finished with his name, the board was passed on to the next PAX.

We made it through:

Prayers for Sharapova, his M, and family as they go through another round of chemo.  We are all praying for you.  Prayers to guide us through this crazy time with Covid-19.

Geek Squad said that he was glad that we didn’t have Grand Captain Dingaling of the Shire (or something like that) here today, or we may have only done one F3 name.

This BD needs some modifications if it is done again.  It did not go as smooth as YHC wanted it to.  You live, and you learn.  SSH’s for days.

Great pre-run with Waffle Cone beforehand.  He is going through a tough time with losing his job.  YHC mentioned that his father just dealt with the same thing.  Before the day was over, Waffle Cone was making connections with people he knew to try and get some prospects going for YHC’s dad.  A true HIM right there.