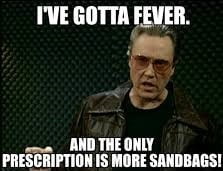 This Q almost didn’t happen if it wasn’t for BoSox reminding YHC. With a few hours to prepare the goal was to bring out some coupons we don’t normally get to see at the Vineyard. To make things even harder on ourselves, 4 eager PAX showed up for a pre-run before the beatdown.

Moseyed up to the front of the school where YHC staged the music and the sandbabies.

Told the PAX to choose a partner. We were uneven so we had 1 group of 3.

Just like regular B.O.M.B.S one partner does the workout while the other runs. The route was up the hill to the other side of the street and back. The exercises were all with sandbags and included:

B – 50x Burpees with Sandbag Deadlift

The hill somehow got longer and steeper as the morning went on. We swept up the 6 and then gathered all the coupons to head back to the flag. 2 minutes left so we put it to good use!

Circled up with 1 sandbag and got into plank position. Plank drug the sandbag around the circle for 60 seconds and then used the remaining 60 seconds to drag the sandbag in the opposite direction just for Gambler 🙂

Awesome morning with all you gents. Turns out you can get Kotters to show up if you promise them swag. I was initially struggling to make it out this morning and somehow showed up for a slow pre-run and a Q. The days that start out the hardest end up being some of the best and it was only made better spending it with the men of the Vineyard.

Butterfly offered an awesome 6th man testimony this morning and we hung out for a bit and enjoyed some delicious coffee. Can’t believe the Vineyard is nearly 2 years old this year. Man time flies and I couldn’t ask for a better group to spend it with. Until next time, SYITG