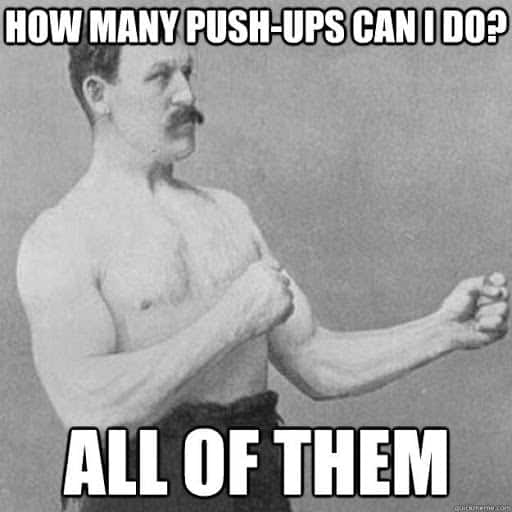 After a brief oval of a mosey, the 11 arrived back where they started, the QIC pronounced the disclaimer, and then the…

**NOTE: the QIC stupidly and inconsiderately decided to do the WOR in the path of the biker pedaling laps around the parking lots**
Following the brief warmup, the 11 had a short mosey to a light pole and the unpleasantness ensued:

THANG 1: The Merkin Route 66
Going from light pole to subsequent light pole in the gym parking lot, the PAX sprinted between each one, starting with one merkin then increasing by one merkin until the 11th time they reached a light pole.

Merkin total so far: 66 merkins (67 for those who did an extra merkin before running to the first flagpole)

And now, for the…

THANG 2: The Cooper
Each round: Run from light pole nearest the gym to light pole on the island with the band ladder. At band ladder island, perform each of the following exercises: merkins, burpees, and squats. Then run back to starting island.
First round, 10 of each; second round, 9 of each; and so on until the completion of one of each.
Merkin subtotal: 110 merkins (55 for the merkins, and another 55 for the merkin in the burpees–Jack Bauer and Geek Squad said they count.  Double verification)
Merkin total so far: 66 + 110: 176

Being good on time, the crew moved onto…

Another 55 merkins. Bringing our total to: 230 merkins.  At some point, Black Swan questioned whether the QIC did so many merkins to look like the inmates he sees on his trips to prisons.  A PAX never tells…

COT
Fanta shared that Tim Tebow is coming to First Baptist Woodstock to speak.
Prayers for Doughboy’s M for her health and the health of her pregnancy.

Brady Bunch opined that Monday’s merkin-laden BD at the Apex was likely more miserable, and offered that he performed as many as 325 merkins on Monday.

Merkin Monday.  Has a nice ring to it.