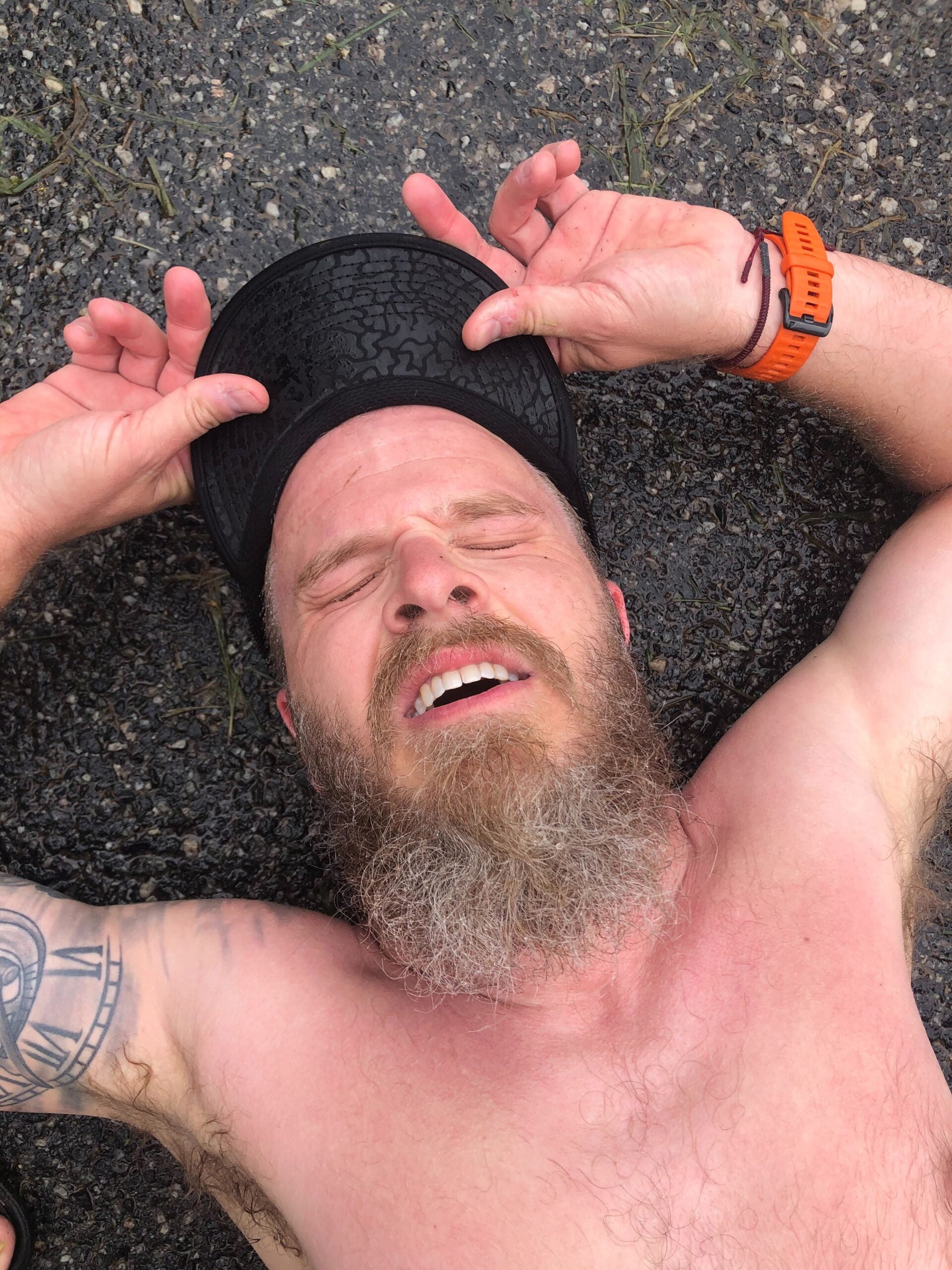 On the drive up to Virginia we worked on our hydration with fierce abandon.  A 30 pack of “Sex in a Canoe” (that’s Coors Light for the uninformed) was no match for our 6 hour drive.  (What’s Sex in a Canoe you ask…. It’s fucking close to water.)  (now that you know what sex in a canoe is you are free to Shakira that shit.  Use it whenever, wherever.)  Oh, and Uncle McGut Chuckles also had a cannister of Evan Williams that was sampled.

In Virginia we found the “Perfect” pizza place and convinced Foosy to bypass the pasta in favor of The Colossus!  3-feet of pizza among 8 guys was pre-race nutrition at it’s finest.  Foosball said something about a 12-year old and the joke made a permanent impression on Brain Fart’s sleeve.

The race began and we ran.  A lot.

The Mole’s labia… I mean The Mole’s Hole was found and marveled at.

Uncle McGut Chuckles talked to a lot of people.

Stopwatch was the calming and steady presence of the weekend.

Reverend Alfonso III serenaded us with words from on high.

One Hour Photo killed one or two of the team members and hid the bodies.

Hardy was rubbed down and screamed with pain, I mean joy, at the whole experience.  The New Gut Check was the giver of the Deshaun Watson Experience while Uncle McGut Chuckles creepily watched on with enjoyment.

Our resident Subaru Lesbian never left his seat and whined about sleep the whole trip.

The rain was cold but somewhat refreshing.

All the MILFs from Where the Wild Things Run Van 1 kept us motivated and looking forward to exchange zones.  And the Pace Booty from Van 2 made the other exchange zones must see television.

Chandler beat the colorful socks off the Subaru Lesbian during Leg 36 which earned her a beer!

As the Subaru Lesbian crossed the finish line he jumped into The New Gut Check’s arms… but then the dumbass leaned backwards pulling a sore and very drunk TNGC to the ground.  Thankfully the Subaru Lesbian fell on a rock and hurt his vagina.  Which will hopefully remind him to not fall backwards when jumping into his lover’s ar….. I mean into someone’s arms.

There was some Mexican food and a VRBO for the after-race festivities.  Which were promptly followed by showers and snoring.  The New Gut Check got up in the middle of the night to beat the Subaru Lesbian for snoring.  It was a joyous time and all left the experience with orgasms… I mean bruises.

The drive back was just as enjoyable as the drive up.  Beer flowed like wine.  Beautiful women instinctively flocked like the salmon of Capistrano.  I cannot recall all the jokes that made us laugh.  The moments that bonded us together and brought joy and laughter and fun.  All I know is, even as sore as my body is right now, I’m ready to go back and do it again in an instant.  I am truly grateful to be a part of Team Shartzler Part Deuce.