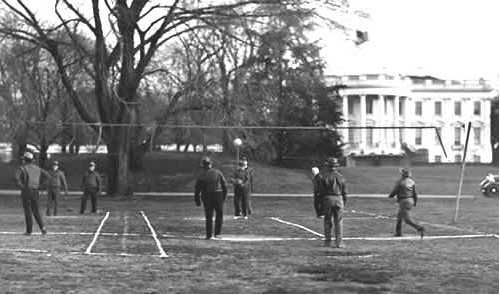 Indian run, medicine ball mosey.  For this style of mosey, we passed a medicine ball from front to back of the line.  When the last PAX receives it, that PAX runs to the front of the line and starts the process all over.  Rinse and Repeat.  Along the way, we stopped for the following exercises:

-This Indian rule went across campus all of the way to the grassy fields on the Neese Rd side of the church.

YHC had guessed (correctly) that the Colosseum PAX had not used these grassy fields yet.  At an AO this large, it is very easy to stay dry on the asphalt all of the time, so YHC wanted to change things up a little bit!

Sprints were the focus on this today, so we did the following:

-sprint length of the field, do 10 star jumps; buttkickers the whole way back, do 15 LBC’s

-sprint length of the field, do 10 star jumps; high knees the whole way back, do 15 LBC’s

-sprint length of the field, do 10 star jumps; karaoke (facing the road) the whole way back, do 15 LBC’s

-sprint length of the field, do 10 star jumps; karaoke (facing the church) the whole way back, do 15 LBC’s

-sprint length of the field, do 10 star jumps; slow jog the whole way back, do 15 LBC’s

-sprint length of the field, do 10 star jumps; sprint the whole way back, do 15 LBC’s

Take a short recovery mosey to the big hill coming from Neese Rd.

-Bear crawl from the bottom to the top of the hill, do 10 merkins at the top; jog down

-Bear crawl halfway up the whole, lunge the rest of the way, do 10 merkins at the top; jog down

Indian run, medicine ball mosey back out to the remote parking lot are, specifically to the Warehouse sand volleyball court. Here, YHC explained the origins of Hooverball (https://en.wikipedia.org/wiki/Hooverball) and explained an F3 twist: burpees.  PAX divided up into teams and went on the court.

-PAX were to throw medicineball over the net.  If caught, PAX should throw it back over.  This continues until the point is won (think volleyball here)

-The F3 twists were: 1) throwing team did a burpee on every throw, 2) team losing the point had to do three burpees before next point started

-YHC audible’d pretty quick away from the throwing team doing a burpee on every throw.  It slowed the game a bit, and this audible likely saved a PAX or two from being knocked out unnecessarily.

-As most competitive things in F3 do, the game started slowly.  The PAX started figuring it out a good bit.  Then competitive juices started flowing.  YHC’s team won in the end as Doughboy did a jump slam for the winning point.

-Sand was everywhere.  Wet clothes from sweat and morning dew form the perfect attraction for burpees in the sand.  YHC’s M was not a fan of the sand……at all.

-Hooverball will need to make a re-appearance in the future!

-Back to the flag for 3 mins of Mary

YHC had only been to this AO once before (hides head in shame since this is YHC’s church too), and YHC had never Q’d here.  Multiple alarms were set as YHC did not want to wear the shame sack that Panhandle had worn in recent times for missing a Q.  The Colossuem is super large AO with so much variety of things to do here, and the PAX here are top notch!  COT consisted of prayers for Sharapova and family, teacher/parents/kids going back to school, and college kids moving into (or back into) college dorms/apartments very soon.  YHC also enjoyed the extended coffeteria as well.  Some things noted in coffeteria:  Dr Tron is much smarter than YHC (hence the Dr in his name), Body Armor has a lite version that is just as tasty, Joycon is very young and has no problems keeping up and pushing the older dudes, Gutcheck buys too many rucks, and YHC and Careless Whisper do swap meets with IT equipment and rucks.

All in all, YHC had a great time visiting the Colosseum and will be back soon!