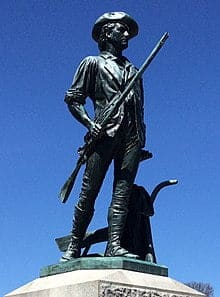 After a quick warmorama we decided the lightening was far enough away that we could move right into the thang. The Smurf was the thang but I suspect some of the faster in our group were pretty close to a full blown Murph today. The first mile was done in a pretty steady downpour. It was all down hill from there.

With Independence today approaching it seemed appropriate to recognize the sacrifice of the men who started it all.

Isaac Davis (February 23, 1745 – April 19, 1775) was a gunsmith and a militia officer who commanded a company of Minutemen from Acton, Massachusetts, during the first battle of the American Revolutionary War. In the months leading up to the Revolution, Davis set unusually high standards for his company in terms of equipment, training, and preparedness. His company was selected to lead the advance on the British Regulars during the Battle of Concord because his men were entirely outfitted with bayonets. During the American advance on the British at the Old North Bridge, Davis was among the first killed and was the first American officer to die in the Revolution.