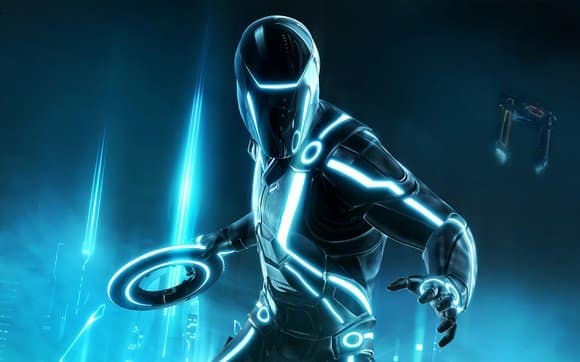 YHC planned an F3 name-themed beatdown. Like the movie Tron, we had to incorporate discs. Enter “Tron Discs” — based on the game Kan Jam — PAX were divided into 2 teams: Users and Programs.

Programs were given the following set of exercises and acted as a timer for the Users who had to throw two frisbees at two Kan Jam goals, separated by 50 feet.

Exercise set that acted as our “timer”:

As long as the Programs were doing their set, the Users would score points by hitting the goal (1 pt), having a teammate knock the frisbee into the top of the goal (2 pts), or throwing it through a narrow slot on the front of the goal (5 pts). (Each PAX kept track of their own individual score and added them up as a team at the end of each round).

The Users worked together to throw as much as they could while time allowed, BUT a PAX could only throw or knock a disc into the goal on a side once. After that, they had to run to the other end (the other goal) to throw or knock the disc again. This upped the difficulty and kept the throwing team moving.

We ended up finishing 4 rounds with the team scoring the most points earning unimaginable glory. It was a close match — Users started off bad and eventually got stronger while the Programs started off strong and got worse. Programs edged out the Users 29-26.

PAX worked hard and maybe had some fun too.

Wrapped up in time for 5 minutes of Mary at the flag.

YHC is thankful for the past year in F3 and didn’t think a community like this was possible. Looking forward to another year!