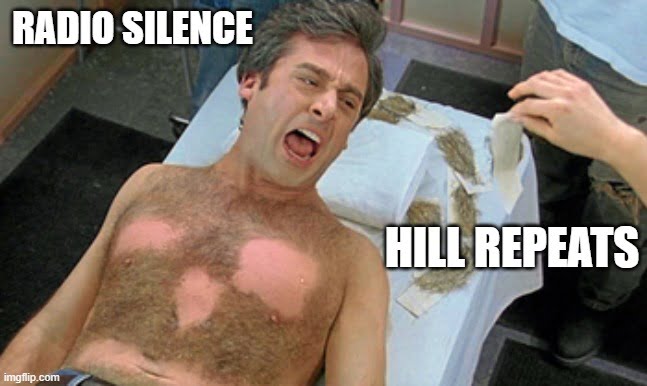 As a regular purveyor of River Green, Sooorie has made brining gainz and painz to the PAX at Radio Silence.  All was silent in slack until the few filled the air with the begrudged moans and reluctant commitments.

This made Sooories heart swell.

Its not that pre running is bad, Sooorie just takes offense that his work outs arn’t hard enough so that others must run before to get their fill.  You see, Sooorie believes in the start on time and end on time, and these pre runners are starting too early.  Until his BD’s are good enough to prevent pre running, he will continue to find ways to bring the gainz.

Mosey to “the Hill”.

You see Sooorie had taken the time to explore his new neighborhood, and when he found “the hill” it was love at first sight.
Steep, LLLOOOONNNGGGGG, and steeeeeepppp.

5 sets up, 5 sets down, 10 count at the bottom.  No games, nothing complex, just as hard as you can, as fast as you can.
The air was silent.  In true fashion to radio silence, no mumble chatter filled the air.  This was a good sign.

After, we took a mosey to the green area just up the road, where Sooorie had hidden his 60lb, 80lb sand bags and two 30lb rucks.  He didn’t want the men of RS to save anything in the tank by seeing those prior to the hills.

With time running out, instead of leaving the gear, Sooorie had the PAX bring them back to the truck.  Why miss an opportunity to get stronger.  It would be selfish of Sooorie to take that away from his fellow PAX.

Mary to end, COT, Prayer for Biebs, Paper Jam, Chubbs and his new job, and the typical heehaw of RS to start the day.