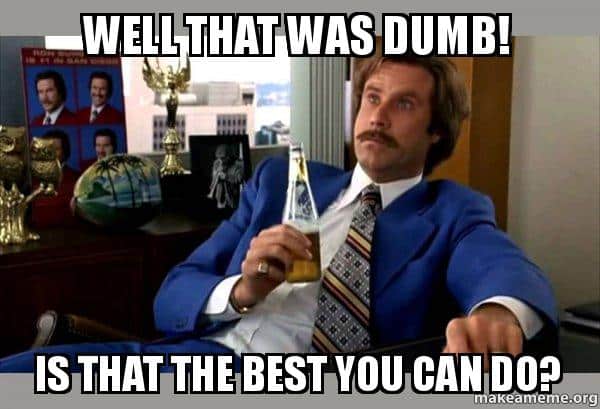 
This is Merkin May, so I decided to dish out a few merkins for anyone who was participating in the competition… and I apologized to everyone else who is not.

Mosey to the football field for some copperhead squats, ssh, weed pickers, sun gods and Phelps

Bear crawl down the entire length of the football field at every numbered line stop and perform an exercise. If the number starts with an odd number perform that number of merkins. Even numbers perform that number of 4 count AmHams. The PAX to reach the other end zone first decides how we travel back. Brady Bunch opted for walking lunges and stop for 10 merkins every 20 yards.

Around Round 5 I halted everyone and we performed 15 in cadence ssh followed by 25 LBCs (elbow touching opposite knee) 25 big boys 15 more ssh and we continued back into our rounds of insanity. First PAX to finish was allowed to halt the rounds and call something else… I finished first so called more ssh and more ssh after that.

Mosey to the flag for some Mary. nobody wanted to call an exercise so I warned them I would be calling merkins. PAX were pretty quick to call their favs.

Wrap with COT and swole arms.

Thankful for those who came out to grow stronger. Merkins are my enemy, so I’ve opted to hit them pretty hard this month and last.

Favorite moment today was while Dump did Jane Fondas next to some truck and of course the dude who owned it got dropped off by his booty call, in his nasty pajamas and went to hop in with his Publix bag filled with clothes. he couldn’t have gotten away faster… except the fact he had to physically pull his window back up b/c Dumps Fondas just don’t quit and made the guy’s window break.

Total merkins looks to be 300 dead on the money. Those are Brad Pitt numbers, fellas!!!