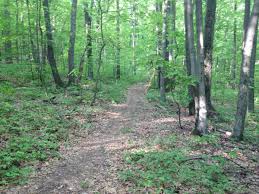 YHC decided to get out a little early for some recon.  Head lamp was just about dead for the recon mission, solid start.

With YHC’s head lamp hanging on to a light glow PAX headed to the dumpster for the Warm-O-Rama because who doesn’t like the fresh smell of trash when warming up.  SSH, Weedpickers, Mtn Climbers, Peter Parker, and Parker Peter.

PAX headed out for a quick loop on the pink lollipop.  YHC’s head lamp was completely out at this point making it seemingly impossible to avoid the rather large piles of horseshit.  Next was down white in search of blue.  YHC still getting familiar with the trails after running them for almost 8 months went right past is it and ended up at the bottom of white to turn onto green.  Went from green to back to blue then down big blue.  At the bottom YHC called out PAX to partner up for Burpback Mountain up Big Blue, 50 total Burpees for each group.  It was only one time up for each pair with each PAX doing closer to 30 Burpees each.  Time to head over to yellow.  At the bottom of yellow YHC called out PAX to partner up again for Burpback Mountain Round 2.  Each PAX made it up yellow twice.  With time dwindling PAX headed to the pullup bars.  OYO 10 Pullups run to the flag 10 Jump Squats back to the bars for 5 Pullups then back to the flag for 5 Jump Squats.  Plenty of time left for a true round of 6 MOM.  Dying Cockroaches, American Hammer, Copperheaded Squats, Werkins, Kobes, Hammers w/ Crunch then time was called.

– Prayers for The Mole’s Co-lead, Jay, at Intransit

– Prayers for students heading up for a Mission trip

Always a pleasure to lead