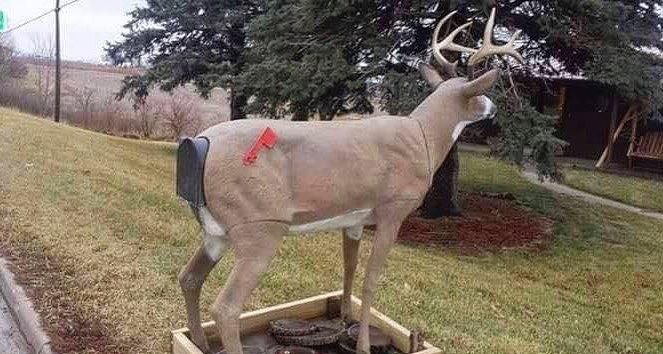 It was 45 degrees and all the PAX showed up early for the first chilly run of the year. As we started the run, Bonilla asked (for a second time) if the course was as flat as his HS girlfriend and YHC responded emphatically yes. About 1 mile in, after 4 sizeable hills, YHC realized that plotaroute had lied about the elevation and we were in for a doozy.

Bonilla was so focused on crushing the hills, he was startled when his headlamp reflected off a mailbox deer (similar to image shown above) that jumped into his path. We’re all thankful he survived.

As YHC and Lt. Dan approached the end of the route, we crossed paths with Wally but E-Tool was nowhere to be seen. Had he gotten lost on a route with only a single turn or did the mailbox deer take him out? PAXs eventually reached the startex and Wally (emotionally disturbed for E-Tool’s safety) drove to check on E-Tool, who had simply beasted up and ran an extra mile on the trails to the lake.

Relieved that E-Tool and Bonilla were safe, the Redline PAX enjoyed coffee together, along with the other 2 PAX who were too cool to run with Redline, but showed up for coffeeteria.