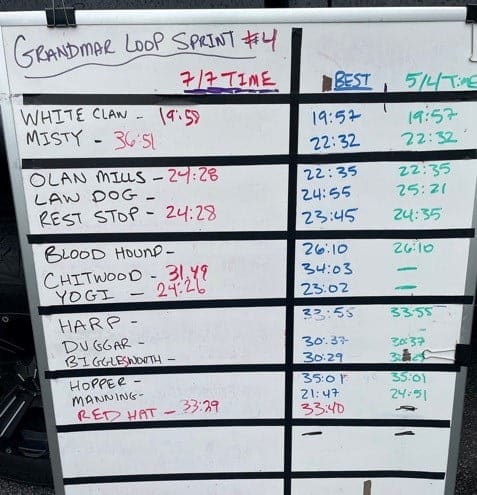 At the Morningwood, every two months, the Pax do a run around the Grandmar Loop to see how much we have improved since the previous edition and try for some PRs. Today was the 4th edition of 2021 and some PRs were set!

A number of Pax pre-ran. Yes, pre-ran a running beatdown. Pella and White Claw pre-ran and then headed to the Kodiak. Duggar and Misty pre-ran and then ran the Grandmar Loop and The Joker had to get home after his pre-run for a work Zoom Meeting.

We discussed The Dirty Spokes race this weekend at Sawnee Mountain. A number of Morningwooders will be attending. 2.0 weekend of rucking and a Beatdown the Saturday before School starts (7/31), and the Savannah Marathon/Half-Marathon. Prayers for Duggar’s M as she has kneee replacement surgery today. Prayers for Duggar as well.

Great time this morning to push each other and to see if all this running we are doing is paying off. Chitwood again had the greatest improvement, shaving off over 2 mins. He may not want to admit it, but he is now a runner! Red Hat also set a PR, shaving off over 10 secs from his previous best. Duggar ran the entire route and the pre-run without stopping, which was a goal for him. Nice work! Misty, being a true-him paced and encouraged Duggar on both runs! Olan Mills stayed back with YHC and helped push me up those damn hills! Could not get a sub 24 time, but maybe in September. Yogi led the pack and we may have finally persuaded him to sign-up for the Savannah Race.  Great group of guys at the Morningwood! Thanks for the push and accountability. Rest Stop out! #makebackblastsgreatagain