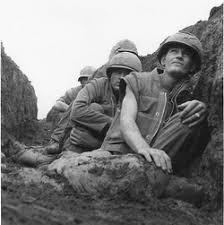 Z93, Rest Stop, and White Claw for the pre-run.  Bigglesworth turned out to be a no show after he started the mumblechatter about the pre-run on slack but probably felt warmer in the fartsack.

Quick mosey to start things off up to the top parking lot by the tennis courts for some IC SSH, Hillbillies, Imperial Walkers, and Weedpickers.

Kicked things off with a Merkin Mile (actually 1.3 miles but who’s counting).  10 variations of Merkins at each pole for a total of 60 Merkins for the entire lap.  Reg Merkins, Wide, Diamond, Off Set Right, Off Set Left, and Ranger.

Next we moseyed over to the pull up bars at the top of the hill behind the pond for a quick Morning Call.  All PAX line up in Plank position while one PAX at a time does 5 Pullups.  PAX in Plank do Merkins on each Pullup for a total of 40 Merkins for each PAX.

After that YHC led PAX to the field for the main course, The Foxhole.  All PAX line up on the sideline start with 1 Merkin then roll to back for 1 WWI Situp then roll again for 2 Merkins then back for 2 WWI Situps.  Keep moving in an escalating fashion across the field adding 1 Merkin and 1 WWI Situp every roll.  YHC made it to 17 (153 Merkins) which was almost 2/3 of the way across the field until the incessant complaining continued to get louder and louder.  YHC picked up on this as a stall tactic to run the clock out so it was time to modify.  All PAX get up on the goal line for escalating Burpee Dans across the field to the other goal line.  1 Burpee for every 4 Lunges in escalating fashion so next was 2:8 then 3:12 and so on.  YHC made it to 7 Burpees to the other end (28 Merkins).  Time was running out so PAX moseyed back to the flag.  YHC ended up with 281 Merkins with exercises but did another 60 with a few rounds of Mary in between some workouts for a total of 341 Merkins.  All PAX were somewhere in that ballpark and YHC promised a count so we could all start Merkin May off with a drop kick in the teeth.

Prayers for our brothers participating in Grow Ruck this weekend

Always a pleasure to lead.