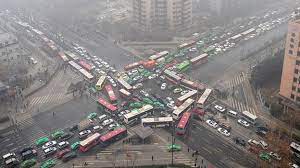 Preamble:  Yogi and White Claw stretching the legs out on a pre-run.

WOR: Run to the bottom of Pink for some Weedpickers, Windmills, Imperial Walkers, and Hillbillies

The Thang: Well to say the events of this morning was a cluster would do a disservice to the word cluster.  No one plans for a cluster, no one hopes for a cluster and no one wants a cluster but you know when you’re in the middle of one and there is usually no getting it back until the time is up so off we go.  The plan was to get a half Murph in while also getting in a 5k.  Everyone has a plan until 13 PAX are all on different parts of the trail yelling at each other and wondering  aloud what the hell YHC is doing.  After the quick warmup on Pink PAX head over to Yellow for 20 Pullups, 40 Merkins, and 60 Squats.  Plan was to head out on Yellow, Blue, Green, and back up White to the Pullup bars on Yellow again.  Once the turn was made to make the ascent up Green is when all hell broke lose.  YHC turned back to pick up the six after a subtle jab from Homeboy.  YHC runs back down Green and over to Blue with no signs of headlights from Yogi or Hombre.  After YHC returns to the rest of the PAX Grylls decides to go on a Kamikaze mission to find the six with no idea where he is going because “that’s what I do, I pick up the six”.  After he takes off YHC says alright let’s pick them up and go find our other wounded warriors.  Again not the route YHC had picked but here we go down Green and do the Green loop that eventually gets us to White then back around to the Pullup bars with Manning incessantly yelling “what are we doing, we have guests!”  Knock out another 20 Pullups, 40 Merkins, and 60 Squats.  With only 6 minutes left YHC planned to head back for some Mary to get the group back together “when C4 grumbled let’s run c’mon.  Happy Jack guarantee”.  The guy can’t let go of the beloved THJ guarantee no matter where he is.  PAX circle around and lo and behold Yogi and Hombre coming running through the gate of the fence like a scene from a movie.  We were one again and headed back to the flag so the madness could end.

COT: Prayers for those that need it most in this season off life

NMM: That was painful.  Glad everyone made it out physically unscathed.  I guess I’ll have to Q again to right this wrong.