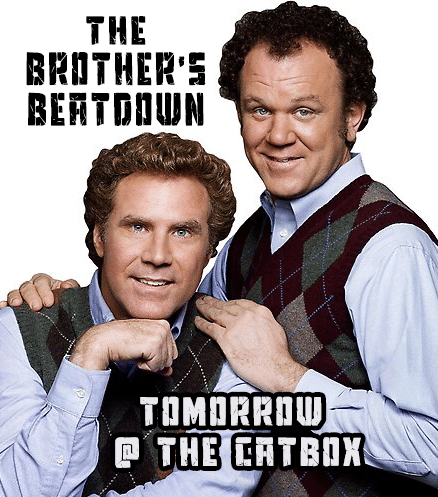 This beatdown was dedicated to the brothers we’ve all found as members of F3.

Each section of the beatdown was preceded by a trivia question that was “brother” themed. The brothers that were featured were the Wrights (flight), the Mannings (NFL), the Youngs (AC/DC), the James (Outlaws).

After we “brothered” up we split into two groups and attacked two stations.

Station 1: Bucket Brigade – A bucket of sand attached to a rope that was slung over an 8′ bar.

Brother 1 runs a lap while brother 2 does pulldowns or seated rows, then they switch. Continue rotation for 12 minutes.

Brother 1 does bear crawl for 40 yards, crawl bear back, execute 25 LBCs. Continue for 6 minutes then switch with brother 2.

Brother 2 does 10 pull-ups, then 25 squats. Continue for 6 minutes then switch with brother 1.

After 12 minutes the groups switched stations.

Brother 1 ran 75 yards then back peddled to start while brother 2 worked out with cinder block coupon. They rotated through curls, overhead presses, squats, and tripps (Name? Push block out front, then right, then left).

With a minute left Showtime lead us in some kind of Russian dance inspired kick-merkin thing. Very effective and required a high level of coordination. Thanks, brother.

In the COT we recognized the importance of brotherhood, and asked for God’s support and guidance.