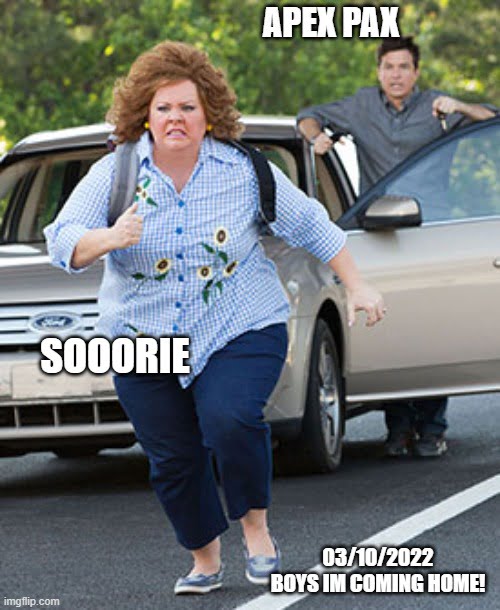 How did we end up with a Sooorie Q?  After Sooorie’s hasty yet well executed (is there a theme here?) sudden move to Canton, Lamb Chop and Snot Rocket had finally gathered the right materials and performed a summoning ritual, which forced Sooorie into forgetting there was an AO 200 meters down the road from him.  The incantation lead him home, in which he proceeded to deliver the gainz he was so well known for.

Since todays BD was a running one, Sooorie needed to know how far the middle school parking lot was.  Upon arrival, Sooorie found Canoe about to do a pre run.  What Canoe didn’t know was that the Sooorie had just volunteered him for a 1 mile pre run, which he was thankful for, until the BD.

WARM-O-RAMA
Started with a  gentle mosey around the parking lot, and to pick up the coupons.  We discussed Tempo pacing, CO2 build up and the goal to train the body to be very fast and be alittle uncomfortable.  No mumble chatter filled the air.

After-
Side straddle hop

Nobody has time for a 5k, and 1 mile is just too short.  Today we attempted to best or set our 2 mile run time.  What gets recorded gets improved.

It was simple, the middle school parking lot was roundish.  To our surprise, it was nearly 400 meters on the dot.  8 laps, for time.  Focused on form, listening to the body, and putting in the work.

It was only natural that Lamb Chop lead the PAX post 3 months in a boot after injuring his arch.  Some Men are just built different.

21-15-9 with a coupon- deadlifts, curls, push press, as fast as possible, focused on form.

Prayers for Brady Bunch as he navigates his world as husband, father, and our perpetual 6th man.  Prayers for Brad Pitt and his M, along with Prays for our own Snott Rocket, as he celebrates his 5th year married.

As always, we thanked the lord for the beautiful morning, healthy bodies, and for the continued strength to do what needs doing.