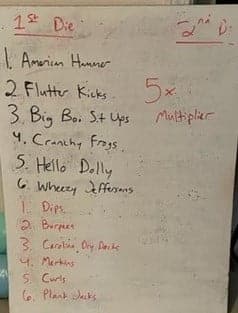 To spare the PAX another 45 minutes of running compliments of newly committed runner Wiggum, YHC took the Q.

After a quick mosey around the lot and to pick up some coupons we settled into our circle for the thang.

Passed out a set of dice to the group and explained the details on the board.

A PAX rolls one die to determine which exercise will be done; PAX to their right rolls another die to determine the number of reps x 5. Play continues to the left after everyone takes a lap.

If the same number for the exercise is rolled back to back then you jump from the red list to the black list or vice versa, which did not happen nearly as often as I had planned and resulted in an abstravaganza.

Suffice it to say we did lots of Flutter Kicks and Wheezy Jeffersons among other ab exercises and only for a brief period of the 45 minute workout did we do a few exercises from the red list.

Good times were had by all, and particular compliments were given for a great playlist.