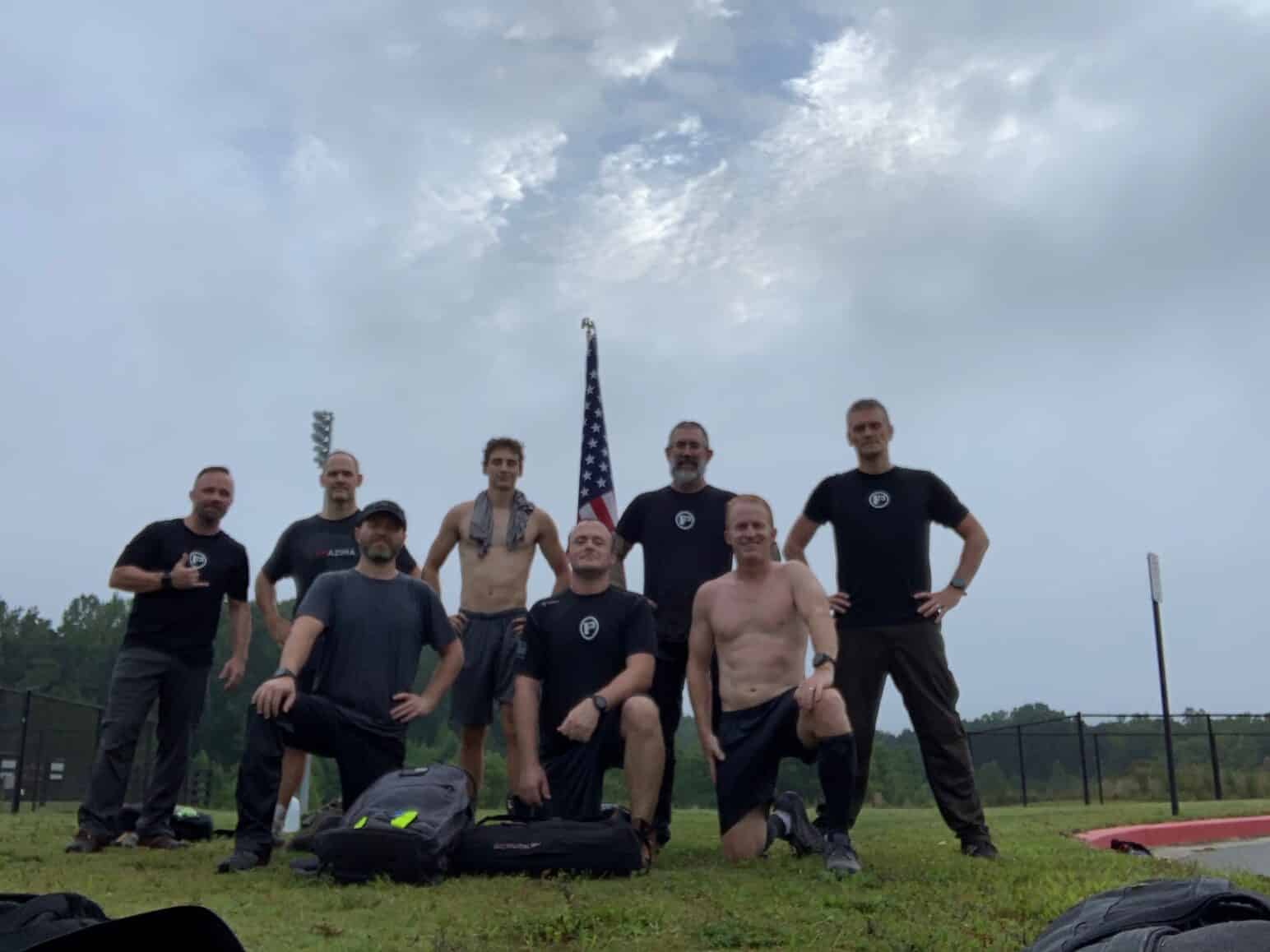 Week 2 of School of Ruck was going to be high intensity, lots of PT, and the PAX got going hard right off the bat.  Clock struck 5am and off the PAX went around the Veterans track at apparently, per feedback, a pretty rapid clip.  We hit each post for specific warm-ups (Copperhead squats, mercans, weed pickers, and ruck overhead from the 4th post to the 5th, which was in hindsight the worst part for YHC, having blocked it from his memory until being reminded this morning during week 3), and yet we still clipped a 16:30 mile.  Nice.

Next, drop the rucks for another trip around the track, objective under 10 minutes, blood flowing now and already over 2.5 miles complete.  Back to the flag to grab the sandparents, and the PAX proceeded down to the beginning of the four-board fence near the football field.  With your ruck, and a sandparent, fireman carry 5 fence lengths, toss the sandparent over, climb over to the other side, pick up and repeat.  This one was a bruiser, and the PAX was wearing down quickly.  Humid day, rumor had it Spicoli had already tapped out of his water by the end of it, Dixie Chic might have quit had we rinsed and repeated, which was the plan, and so back to the flag for our primary mission, the rescue of Marilyn.  Who, you might say?  Our 120lbs sandparent, soft and sweet in all the right places, as only Marilyn could be.

Rumor was that she had been kidnapped by Leaguers, known anti-ruckers hostile to the trade, with a weapon of choice being their effete disks.  Kidnapped apparently as a mouthpiece for propaganda that their little exercise is legit, she would have none of it, unpersuaded was she, preferring the grit and determination of the GoRuckers themselves, and so left for dead in the woods behind the park was Marilyn, beyond retention pond as intelligence indicated, and our job was to rescue her in the most direct fashion, and carry her 120 lbs sweetness to the rescue zone near the tennis courts at the high ground of the park.  Partner and ruck up, plus a sandparent between the two, and proceed to locate her.  Danger crossing protocol at all path intersections, Bloodhound provided a little lesson, given the presence of League hostilities.

Marilyn was found, Bloodhound brought a make-shift stretcher, and combined the eight PAX carried Marilyn and another 200 plus pounds of sandbags up hills, over fields, and peacefully to the rescue zone.  The crew is almost 7 miles in at this point.  Back to the flag, drop the bags, and proceed to the track.

Rucks down, for a modified Pittman.  A what, say you?  1.25 mile run, 7 rounds of 30 ruck squats / 10 overhead presses, followed by a finishing 1.25 mile jaunt.  The PAX crushed it, about 15 minutes left, rucks back on for a tunnel of love commando crawl along the fence line, and Old Glory in sight and top of mind.  Water and hydration is tapped, leg cramps setting in, and this QIC was admittedly getting lightheaded.  2 minutes left, hustle to the flag, one full happy jack, 9.62 miles completed, and finish.

Prayers for the community, for our children, for patience and wisdom, and for these men who awoke around 4am and knocked out three hours of a fulsome school of ruck.