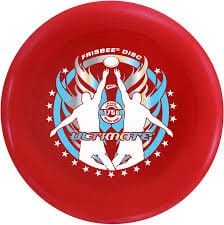 YHC noticed a lot of cars heading up to the Skate Park/Pickle Ball courts last week and thought we should have a beatdown up there this week. So we did and there was nothing going on!

YHC arrived and there were two PAX waiting! Could it be two FNGs, well kinda. It was Play-Doh from F3 Ohio and his dad, a FNG! Bloodhound arrived shortly thereafter and we had a pretty big crowd of 7, so off to the mosey. About a quarter of the way through the mosey, Misty came rolling in, so we circled back and picked him up!  We moseyed to the stop sign up ton the road to the Skate Park, circled up, and did the following:

We moseyed up to the Skate Park and YHC introduced the PAX to some Frisbears. Panhandle made a quest appearance at The Safari a month ago and introduced the North to these, so YHC stole his idea, because these are awesome! Each PAX takes a turn, throws, and runs to the disc. Once it hits the ground, you bear crawl to the disc. It was awesome; bringing some of the League to the North, until…Bloodhound got his chance. He had this evil look in his eyes, like he does when he drives up with the telephone poles and sandbags for a beatdown. He reached back and throws the disc over the fence, down a 200 foot ravine, with snakes, rats, and gators. Bye bye Frisbee.

So, after being in a little shocked and trying to figure out how YHC was going to explain to my 2.0 that I lost her favorite disc that was given to her by Walter Fredrick Morrison before his death in February 2010, I had to pull it together and move forward. I have a freaking Q to finish!

Next up…Pickle Ball Suicides. The markers were the 1st fence, parking lot divider, 2nd fence, and lastly the Pickle Ball court. The PAX could not go around (or under) the fence, but had to go over. The exercises at each marker we are follows:

After each exercise, the PAX that finished early, planked, waiting on the 6. With time running low, half the PAX thought we might be able to find the disc, while the others headed to the road and ran back to the flag! After fighting off a couple of black mambas and swamp rats, Misty was a hero and found the disc!! No crying 2.0 to worry about!

We discussed the 10 year Anniversary and the Fund Raiser for The Carrell Family. We asked for Prayers for Community Leaders and School Leaders with some upcoming tough decisions. We also asked Prayers to look over Duggar’s M who had knee surgery, for Cricket’s recovery after his accident, and C4’s 2.0.

Great time this morning and enjoyed seeing everyone. Welcome to Rip, who is the Dad of F3 Ohio’s Play-Doh, but from Canton. He was named Rip after Rip Van Winkle, since he has a tendency to fall asleep, even while getting a haircut! Great group of guys this morning and the disc throwing really got the mumble chatter going! I really think Bloodhound needs to go to League and work on his disc throwing. He might could learn and thing or two from Good Hands! Rest Stop out!