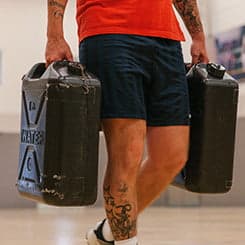 Was hoping for a wet day today but the rain held off…  Since WhiteClaw’s pre-run route has a well worn path, we took the bags down to the 25 yard line and dumped them there for a quick 20SSH without any formalities as the veteran’s present are well accustomed and always ready to go.  Ran to the far corner post at the north eastern edge of the walking path and divided into two groups of 4.  One group to run one direction and one the other with the expressed purpose of running hard.  The half way point is about where the generator is approx, so with that said team Leaky Rat Man Boy (LRMB) won that challenge.

Then we grabbed the 6gallon jugs which were staged behind the generators and we set them up on the path establishing the two teams with each member numbered 1 thru 4.  Whilst the first man farmer carried the double 50lbs jugs clockwise back to the north east corner post, the rest of the crew performed 25 merkins and then ran to the first man and second man took the jugs continuing the journey.  The other members performed another 25 merkins.  We continued this way until we reached the NE post.  Team Explosive White Harp Man (EWHM) won that challenge.

Moving to the 30 yard line, again in the same teams fully cycling thru twice with farmer carries from the 30 to the goal line, the rest of the team ran the opposite 70 yards and back performing 25 BBSUs.   Then we attempted and perfected a sand bag carry around the football field.  In all honesty, I called it in honor of Legionnaire – so what would you expect but something crazy to happen.  We started with 7 bags and got rid of all but 1.  Lead man ended up with the bag whilst everyone behind performed the American Native Run.  It was a goof up but everyone enjoyed the rest from the farmer carries.

Once complete, we went back to 2 cycles of 30 yard farmer carries while other team members performed rounds of 25 merkins and 25 BBSUs.  Once again team LRMB won the challenge.

From there we picked up our toys and headed back to the flag for the COT as time had expired.

Everyone was spent and content with the effort put forth except for a couple with a sourpuss attitude stemming from their bitter spirits and small penis complex LOL!