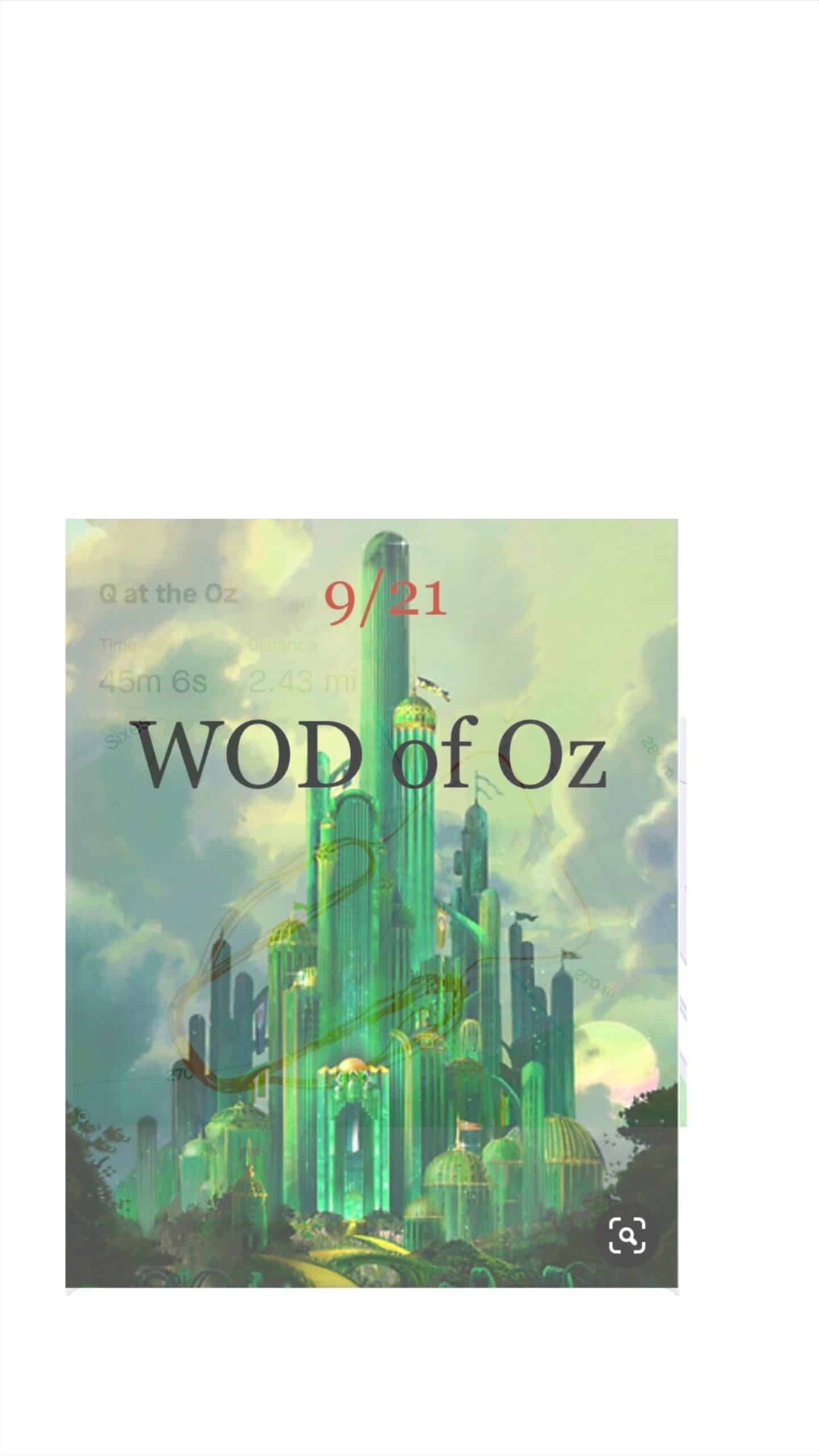 Intro:
YHC had been planning to get back to post at the Oz and when the Q was open saw a good time to do that. (Did not plan for @Vespa to be gone that day but for some reason the Oz PAX initially were more happy to see me at the Q then him. Not sure why, (maybe his bear crawling up steep hill BD’s have something to do with this..) In any event, they were smiling until YHC unveiled the WOD of Oz planned. (Basically it was an Adjusted Bert WOD with more running..)

Warm-O-Rama:
Mosey out of the church exit up to the main road back down on the other side entrance around the back of the church and circle up near the “impossible to steal or lose” flag location: SSH, (Side Straddle Hop); TWP’s, (The Weed Pickers); IP’s (Imperial Walkers); MP’s, (Michael Phelps); & SG’s, (Sun Gods)

*Plan was If one round got completed, bear crawls were on the menu with a rinse and repeat directive after that. More about the “If” below.

COT:
Thanks we are able to come out and get fit together like we did today, others are not so fortunate. Prayers for DumpTruck’s M’s grandfather in a tough situation in hospice. Collective Prayers for attending PAX’s families, including Tenderloins’ growing family with a new 2.0 due in Feb! Also, prayers for those prayers not mentioned.

NMM:
Snap On informs YHC early on that he had been out for 3 weeks for a running injury right before we go to run for the warm-up and before YHC gets to point out we will get about 2.5 miles of running in between reps.. (Woops, “modify as needed”… ) Despite this, he did great and kept a swift pace through the whole BD! WOD of Oz had nothing to do with the Wizard of Oz and everything to do with the AO name and YHC’s intent to plagiarize some WOD out there for the BD, ;). YHC stole The Bert, but modified it due to the run distance we had to work with at the Oz, (660 meters, versus 400 meters for The Bert) and also because YHC thought starting the BD with 50 burpees would have been mean, we only started with 40. YHC adjusted the other reps down too. (It is a good thing that adjustment was made…)
As we wrapped up the WarmOramas and YHC was PAXplaining the WOD to the PAX and referencing YHC’s “illuminated white board”, Dump Truck came driving in “early” at about 5:09am. Got him up to speed and he jumped right into the burpees with a smile, (what looked like a smile) with the rest of us.

YHC thinks this was the point that Tenderloin let YHC know that a 10 rep modification was not that much of a modification from 50-40… While he complained, YHC has no idea why as despite being half awake from camping with his 2.0 over the weekend and watching horrible Sunday night football, he killed the WOD of Oz this morning!

The PAX kept attacking the reps. The running path and the walking lunges path also had an overlay route which allowed the PAX to hear each other cursing YHC as some ran while others did their walking lunges. *YHC likely cursed the most though, (240 walking lunges is a lot…) Tenderloin was polite and waited to curse YHC about those on Slack later in the morning..
As we were coming down the other side of the round of the WOD of Oz, Snap On mentions that he hears YHC’s slot machine timer ringing which informs YHC that we will not even make it through a full round.. 660 meter runs takes longer then YHC thought.. It is also about this time that Ratchet tells me that he comes to the Oz BD on his lunch break, (at 5am in the morning! Guy is working hard and still getting his fitness in!) and he says he needs to leave right at 5:45am and has to head to his car. So… YHC let the PAX know we need to wrap up reps and we looped to pick up the 5th, (we only had 5 today so yes, “the 5th”). Time did not let us get to the second round of Merkins or Burpees, (there were only 40 burpees left..) but I would still say it was still a BD. We then met for the COT near the “impossible to steal or lose” flag location. Did the COT thing, YHC passed out some warm and cold water, (Dump Truck wanted the warm water for some reason..(?)) and we then caught up on IronPAX stories. Also had discussions about AO locations, PAX posting numbers and what motivated people to post, & preferred starting times of AO’s. It all wrapped up for me with Dump Truck sharing pictures of what his PE students believe are triangles with more than 3 sides which represent their emotional and physical health. 🙁 Great welcome back to OZ! Love these guys and the time here! Will have to get back when @Vespa is not hanging out in LA next time..