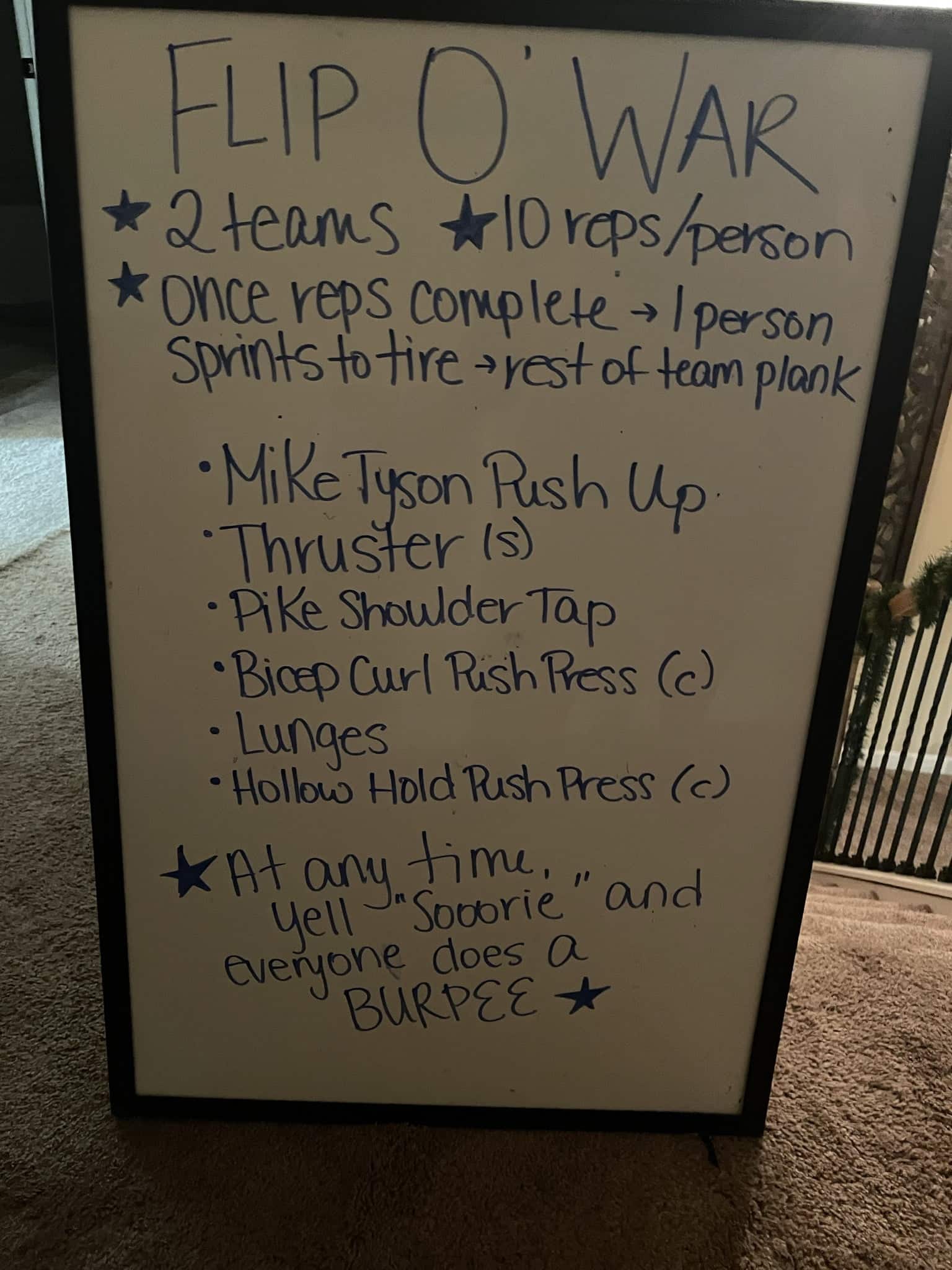 Bataan Death march – Play on Indian runs, but the last man does 5 burpees then has to sprint to catch front man.  The gazelle like nature of the Murph made this particularly spicy.

Since SOOORIE didn’t have his shit straight, PAX received extra credit by running to find coupons.

Since the Murph attracts a particular breed of HIM’s, a simple tug o ’War simply will suffice.  The PAX was split into two teams roughly 30 yards from the center was SOOORIE’s infamous BBT (Big Black Tire). Each team had to complete 30 reps of the first exercise.

At completion (since we do not leave any man behind), one person sprints to the BBT to complete as many tire flips as they can.  The tire stops being flipped once the opposing team (second to the tire) is touched.  Then back to their team to continue down the list of reps, and repeat.

Team that pushed the tire closer to the other team was deemed the Victor!

*To add to the fun, if any PAX yelled SOOORIE, EVERYONE had to stop and do 1 Burpee, this was abused to the amusement of PAX*

We honored John A. Chapman (July 14, 1965- March 4, 2002) was a combat controller in the United States Air Force who lost is life in the Battle of Takur Ghar during the War in Afghanistan.  He was the first airman to receive a Medal of Honor since the Vietnam War.

John Chapmans crew and helicopter came under fire and suffered damage from an enemy RPG, causing one of his men to fall from the aircraft.  The aircraft was able to egress 7 kilometers away.  Upon landing Chapman was able to coordinate with an AC 130 to provide cover fire.

Without regard to his own life- Chapman volunteered to rescue his missing team member from a nearby enemy stronghold.  Chapman engaged and killed two enemy personnel.  He continued to advance reaching the enemy position then engaged a second enemy positions, a dug in machine gun nest.

At this time- the rescue team came under fire from three different directions.  From close range he exchanged fire with the enemy from minimum personal cover until he succumbed to his wounds.

His contributions saved the lives of his crew members and of the rescue team.

Fourteen years after Chapman’s death, he was nominated for the medal of honor when new technology was developed that allowed for a deeper understanding of the fight.  Chapman later regained consciousness and resumed his fight against Al-Qaeda.  Chapman crawled into a bunker, shot and killed enemies charging at him, and another in hand-to-hand combat.

I felt particularly drawn to Chapman’s story.  He was 36 years old, in the middle of a war, and was determined to leave no man behind.  While I am not suggesting each PAX work to themselves to the grave, what keeps men coming back isn’t the workouts, it’s their fellow man.  There will be no shortage of people starting the year working out, and while that is a great opportunity to recruit, let’s not forget those who might have been left behind.

We prayed for Oracle’s family and father who was recently found unconscious and was admitted to the hospital.  On his way home from the hospital, Oracle ensured that the MURPH had our flag and board by stashing the equipment and sending Sooorie and Scotch Guard details on their location.

We prayed for the strength to be High Impact Men, and prayed for the men who started their day at 5:00 AM.  Brothers that sweat together stays together.

Prayers for the asked prayer and unheard prayers of our fellow man.