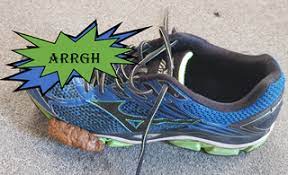 PAXs did a little mosey and circled up in the parking lot. Performed SSHs, weedpickers, copperhead squats, imperial walkers, and michael phelps.

PAXs moseyed to the coupon storage area where someone had taken a large, thick dookie that YHC stepped in, which oozed up onto the side of his new shoes. Q was not happy and suspects Eggplant to be responsible.