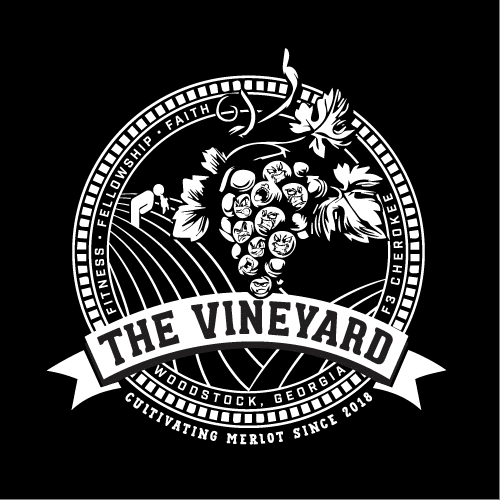 Where ever we may roam today at the Vineyard…….. small but mighty group sweat it out at a 100% humidity.

Warm-o-Rama: mosey with ass kickers and karaoke. Fast toy soldiers, Willie Mayes, sun gods, Michael Phelps, Merkins, SSH
Thang: 3 rounds of incline lunge up the ramp starting with a stationary exercise….. 100 mountain climbers, 50 plank jacks, 25 scissors kicks.
3 corners in small parking lot, crab walk to each corner; 100 SSH at 1st corner, 50 flutter kicks, 25 big boi’s.
Mosey to side of RR with a 20 yard or more bear crawl through the tunnel on the way, ring of fire…….. 60 second forearm plank, 30 second forearm side planks, austin ass kickers, superman fairy punches, LBFC’s.
Mosey up over the little hill, then up grapes of wrath “easy fellas, just passing through”.
at the small round-about at Mill Creek, wheel of merkins 5 rotations then reverse run to third light pole, 15 sumo squat thrusters and run back.
Mosey to Mill Creek walls, 15 dips IC, 3 sets of wheel of merkin on curb, 10 dips IC.
Mosey back to flag, and time.
COT: prayers for Lizard Kings uncle, Stopwatch and M.
Naked man moleskin:
-Glad Drumstick didn’t wake up early enough to make it to the witch
-Glad Nesquik doesn’t wake up early enough to go the clinic
-Calf raises on the six today because well Drumstick was there
-Lizard King was feeling the Monday slumber but pushed through with unyielding will
-Wheel of merkins are deceitful…. the transition between positions takes some extra gas and all that damn rotating will get you dizzy but Bosox was spinning around the curb like machine work.
-School season is on full force at the BoSox residence. After COT my man is out like a ninja in the night. Way to be there for the family bro.