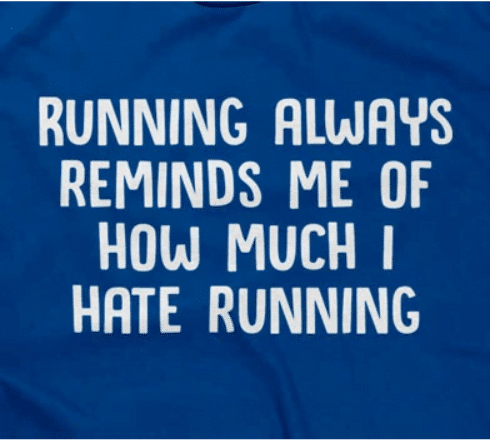 So Duggar is supposed to lead this thing right? So… shouldn’t he show up a few minutes early and do some prep work? He’s not going to come in on two wheels like he normally does is he? Well…… yeah. That’s what happened. Just enough time to acknowledge that he had prep work to do that wouldn’t get done. Then….

Follow Duggar around for his slow mosey. Circle half the upper parking lot and then all the way down the hill before we circled up for:

With help from the other Pax we taped up 5 pieces of paper on 5 light posts with an exercise on each. They were:

PAX would complete an exercise and then take a BIG lap. Up the hill and around the entire parking lot before descending back down the hill to do the next exercise. Dixie Chick lead the way with Babyface in close pursuit. Aisle 7 was about equidistant between the gazelles and Duggar who as usual was picking up the rear. Dixie Chick and Babyface finished just as Duggar was completing the Lunge Jumps so the 3 of them that lap together. Aisle 7 was finishing up his burpees when the rest of the PAX arrived back so we all did 10 burpees in cadence to finish off the circuit.

Jogged around the parking lot to the front doors of the school, where Duggar announced a Dora circuit.

75 Hand Release Dips on the curb

Non exercising partner had to take a lap of the parking lot.

Once time ran short, Babyface took his lap in the opposite direction to pick up Aisle 7. Once they returned together we finished off the rest of Dixie Chicks air presses together and in cadence, 115 of them.

Just enough time to knock out 10 Imperial Walkers and stand around for 9 seconds before RECOVER.

Prayers for Babyface’s coworker who went to the hospital with labor pains even though she’s not due until late October. Lifted up our brothers in F3.

Why so much running Duggar? What the heck? And through soup. The soupiest of soup.

Also, Duggar is not the worst Q in F3 but this was a bad Q. No prep work, little imagination, little variety and he couldn’t even charge his speaker for the beatdown. We expect more from you Duggar. IF we let you lead another beatdown at Castle Black it had better be a VAST improvement from this one. Also, no one ever reads these things anyway.