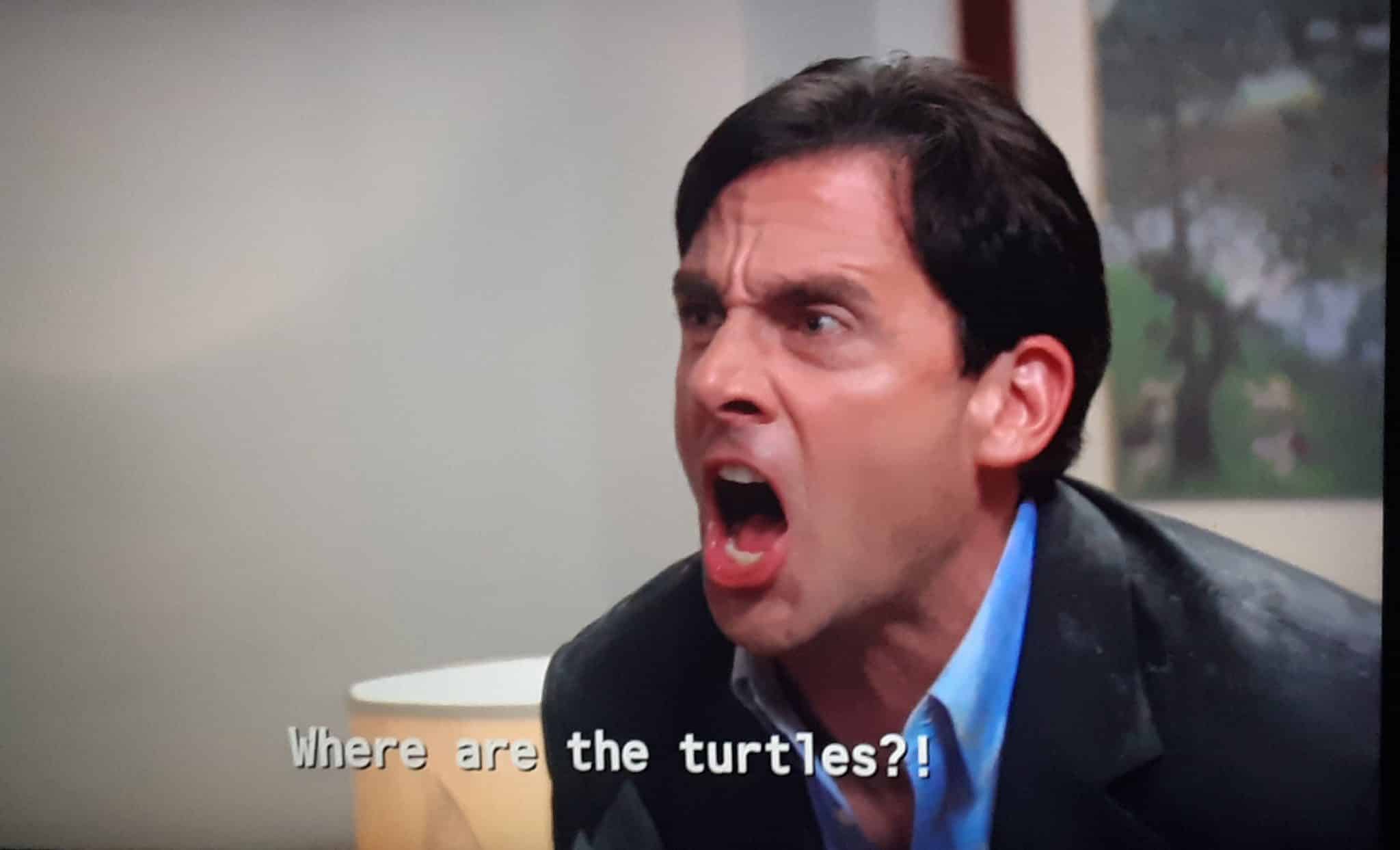 Whelp… Where to begin.

Geek was supposed to have the Q and when he decided he didn’t want to run before his “big day” he “bailed” on his “responsibilities” and left Turtlehead “in charge” to find someone to take the Q. Turtle, as he does every time there is an open slot on the Q Sheet, called Mall Cop out. After the 50 Billionith time, I caved and took the Q. There was some spitfire back and forth between Bonilla and some girl named Catalina, and YHC opted to Q a route that Gazelle, Turtles and “whatever is in-between” could run.

The morning was bleak, not too cold, not too anything else. Light numbers when I arrived but we quickly found that not many more would show up. Foosy was already steaming and Turtle was staring… Shortly after I arrived Farm Country and Z came squealing into the lot, which is when Z decided to adopt the “I’m not a turtle or a gazelle, I’m whatever is in-between” mentality. I kept waiting for the Turtles to show… but turtles are slow, right?! they’ll be here… but nope. Slow and steady as they may be, they did not win the race against the clock.

At 0500 I adopted a new route. This was the route of routes for me. Everything I hate about the Pineapple all rolled into one. Because, after all, no Turtles means no loop. Just suck.

Route started running towards the entrance at Barnett where Farm Country alerted me to the fact that concrete is “not trail”. We hung a right and up the steep embankment of the power station and proceeded to bushwhack our way towards the trailhead. everything was great, we were carrying on as we should when Foosy mentioned he’d never trekked to Mall Cop Island before. Well, what a better opportunity!? I took the PAX over to Mall Cop Island so Foosy could get a glimpse of the illusive majesty, and just like always before, you never leave the island unscathed. We hit the end of our trail and turned back, but true to MCI form, the exit is not the entrance… We ended up, as always before, on a side trail that took us to someone’s property line. Z didn’t have fun and asked to turn back vs heading off to find the “regular” trail, so we obliged and went back to MCI. we eventually made our way thru 2 moon cycles and found the “regular” trail again.

some regular old trail running later and Foosy opted to roll an ankle vaulting over the tree bridge b/c Farm Country “made it look so cool” we wallowed in his pain for all of 30 seconds and he jumped back up and ran on. I believe this is where the Avengers discussion between Z and FC began, and they’re still talking about the movie to this day.

I guided the PAX over to our standard river crossing, passed over the water and waiting for the 6. as soon as the 6 arrived, still talking about The Avengers, I told them it was time to go back across the water. Z was not pleased, again… He wasn’t a fan of one unnecessary water crossing, let alone doing it back to back.

Guided the PAX back to the BM Bridge and up to the street level to see how regular people live at 0530. We ran up the steep hill, air chair on the 6, who of course was still talking Avengers, and back down to the bridge. I lied about my watch malfunctioning and told them we had plenty of time to repeat the hill… If Z and FC could kill with a look, this would have been the time. THEY HATED ME, but I had us run the hill again anyway. After the second pass, they were no longer speaking super heroes which means I’d done my job! However, Z protested when I said it was time to run the hill again.

Joking aside, we headed back towards the “regular” trail and over to the bridge to loop around the softball fields. Foosy guided us into BM since he’d already done it 5 times this day and we ran up yet another hill. Z was once again talking Avengers and Foosy bailed on Turtle and me as we hit Sixes saying “y’all go ahead I aoivwejvalkaewoiugawg mumble” ok…

rounded the day out by scaring the Geek out of Geek forcing him to make an abrupt end to his emailing inside his warm, cozy car, and run to the bathroom.

Prayers and more Avengers talk, obvi, and here we are.

disappointed that the Turtles didn’t show and that girl named Catalina didn’t either… Glad we got to experience some portions of the Pineapple many PAX don’t typically travel. Will we run this route again? Ask Turtle, b/c the next time he throws my name on the sheet we will be running this and adding in Waffle Face Mountain.