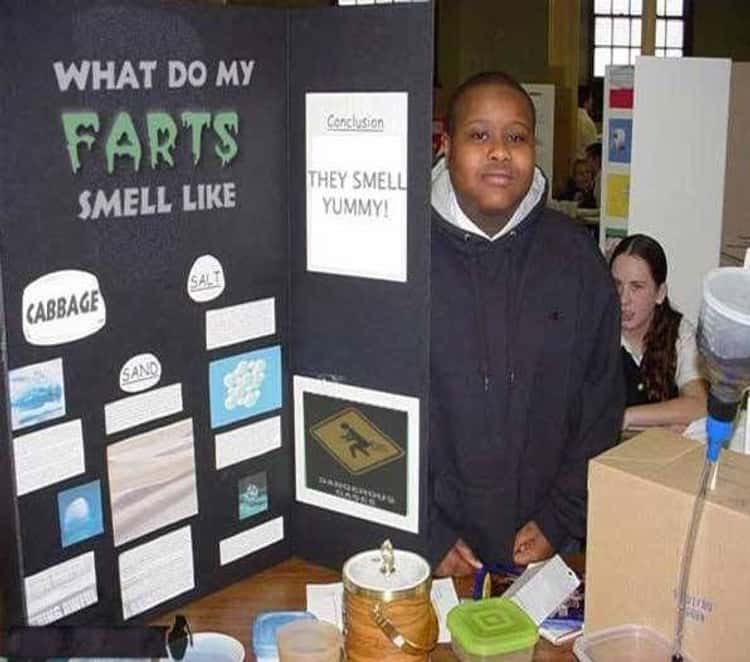 This was a science project because we worked from a classic science project tri-fold foam core board that showed our exercises. One side was one of my son’s actual science projects (it was very confusing), and the other side was the Thangs… very scientific. We also learned what happens when a speaker runs out of battery charge. Very, very scientific. We all learned a lot. Although it was not scientific, and had more to do with social studies, both Chicken Fight and Ringpop learned how to dance, courtesy of YHC and Hitch (the movie, not the PAX).

Let me say that Chicken Fight and Ringpop were also there, but their names are not in the drop-down menu.

Circle up for the Warm-Up of SSH, windmills, and other stuff.

Partnered up. One PAX did the exercise and kept count while the other ran a circuit. Flapjacked on the return and picked up on the count until done 100 merkins (arms), 200 LBCs (core) and 300 squats.

This is an escalator that starts with 5 burpees, and a run, then 5 burpees plus 10 lunges and a run, always adding an exercise until you’ve done burpees, lunges, imperial walkers, merkins, plank jacks and squats. A few of the PAX — Rocket Man, Cannonball, Chicken Fight and Ring Pop — completed them all before time was called.

At one point Chicken Fight and his brother Ring Pop started arguing about whether Ring did his 5 burpees or not. It got ugly. JK. Blowpop,  said, “Hey, no talking.”

I had never heard anyone say that at a beat down.

But since Ringpop was not the Q, I said. “Hey, old man. This is my Q. I’ll give the orders here. Hey, Ring Pop and Chicken Fight — No Talking.”

Having nipped that in the bud, we moseyed to the flag for Marys for 5 minutes. Rocket Man called flutter kicks, Blowpop called box cutters, Dump Truck did sexy Jane Fondas and Chicken Fight called 1-10 squats. Whew.

Cannon Ball was the 6th man, and he talked about redemptive suffering, and how our attitude about life’s struggles is so important. You can look at challenges as a victim or as an opportunity to find the joy and be stronger because of them. Thanks, Cannon Ball. I think that’s a message we should all hear every day!

We prayed for Dump Trucks friends who may be in transition in their lives. We prayed for Cannon Ball for peace in his young family. For the students there — RP, CF and RM — for focus in their studies, and for the men there, that we may prioritize correctly and focus on the most import work we need to do today.

YHC was almost a science project of his own when he nearly splashed merlot but only enjoyed some dry heaving. I had been traveling and had not beat down since April 14, and it’s not always easy to jump back into F3 at 55 years old, but now I feel great!

It’s good to be back in the gloom with my brothers!