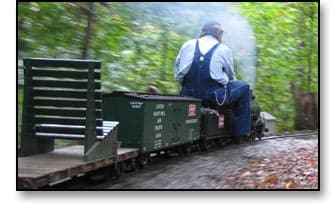 Wanted to take the PAX to a few places in Canton the May have never seen. Going to do a ruck with PT stops along the way.

Ruck up and out we go.

Rucked out E. Main Street. Stopped in the Parking Lot of Family Life Publications for some PT. Carried on and turned left on N. Crisler St. for a surprise. Rucked until the road ends on a long, dark gravel driveway. Past an old cemetery to a gate. Introduced the PAX to the Canton, St. Paul, and Pacific Railway–a 1 1/2″ scale live steam railroad tucked in along the river. PT.

Rucked back to Main St. and carried on east until we turned south on Muriel St. to McCanless Park, a hideaway gem of a park in the heart of residential Canton. Rucked the loop and then back toward town the way we came. PT stops along the way, including some right in front of a house. Took Jarvis to Archer street and all the way to the lot behind Panera.

Final stop in the pavilion for some Chops-led flutter kicks to end the morning.

Prayers for Chops’ family (aunt Delores especially). Prayers for our leadership in families and life.

The decision to move the Rattlesnake to Downtown Canton was a good one. Adaptability is a key to F3. This AO has adapted and grown accordingly. Love to Q this bunch of guys!