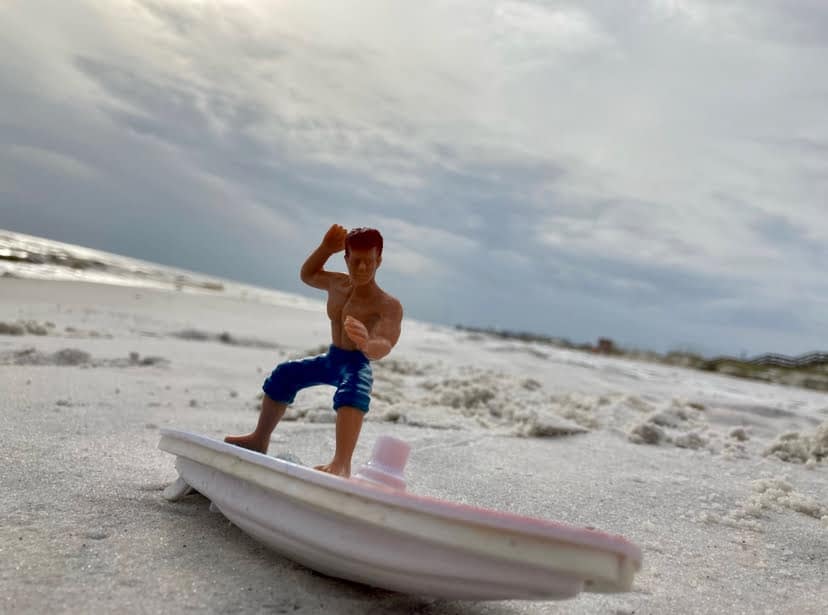 WarmUp: a) Mosey carrying kayaks, paddles and shovels.  b) brisk run thru the thick sands of the beach (those choosing the easy hard pack were reprimanded) then thru the flooded brackish dune walkway and back to the center of ops down from the boardwalk.

Activity:  4 groups with the center activity digging out the F3 logo on the beach with FUBAR beach shovels until the next group relieved them.  1) take the kayaks into the surf, mount and paddle Kodiak count 20 strokes into the heavy waves and perform a turn without getting flipped and try to ride a wave back to shore and return the kayaks to the transition area b) bear crawl 50 yards perform 20 BBSUs and crawl bear back c) run up the beach to the top of stairs on the board walk performing 20 Merkins at each of the 3 landings up the stairs and return d) high knee skip 50 yards plus 20 Kodiak count flutter kicks and run backwards to transition area.
Rinse and Repeat until Kiffin is satisfied with the quality of workmanship of the F3 logo.

After completing several rounds we proceeded to run 6 100 yard segments of out and back each with furthering distances performing 20 Merkins at each turn around point.

Final close out activity was 10 Surfees.  Then transported the kayaks back to the house for a Manning approved COT and coffeteria.

Some were satisfied-some were not, some were built up-most were torn down, some were chaffed-all were sandy and in all this, none were coddled but each one left with thankful hearts for the F3 brotherhood!

…..and if you actually are reading this, let me know….