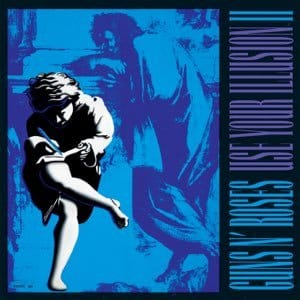 Everyone knows Use Your Illusion II was WAY better than I. Carried more grit, fire, and determination! Just like the PAX at the Vineyard. Volume II had a new twist… bring a headlamp… to the brightest AO in the county.

The PAX obeyed diligently, wondering if YHC was taking them in the woods off the side of RRHS.

The usual for YHC… SSH, Weed Pickers, (Throw shade at Linda’s M for being late!), Imperial Walkers, Windmills, and the PAX’s new favorite… the Li’l Baby Arm Circle. “Aren’t these Sun Gods?” “NO. Because they are small.”

Circle up around the Bluetooth speaker, a light pole, and roll of trashbags. Hand out a bag to each PAX. You gotta clean up after a party before your parents get home. The kids, back in school since August, have made a mess of the campus. So, like any kid who throws a party, we’re left “footin’ the bill” with the trash.

Run to fence line, pick up 5 pieces of trash. Run back. Draw a “travel” card from the F3 deck for how we’re getting clear across the parking lot and draw an “exercise” card for what we’re doing when we get there. Do the work and travel back. Then, more trash and repeato.

After 45 minutes, the place looked glorious and the PAX were toast. And yes, Trill, a headlamp helps you see trash between the couch cushions.

Prayers for Scamper. It ended there. God bless his family dealing with the horrible tragedy and loss of his mother.

Life is really short. Play cards. Listen to G’n’R. And pick up after you’re done!