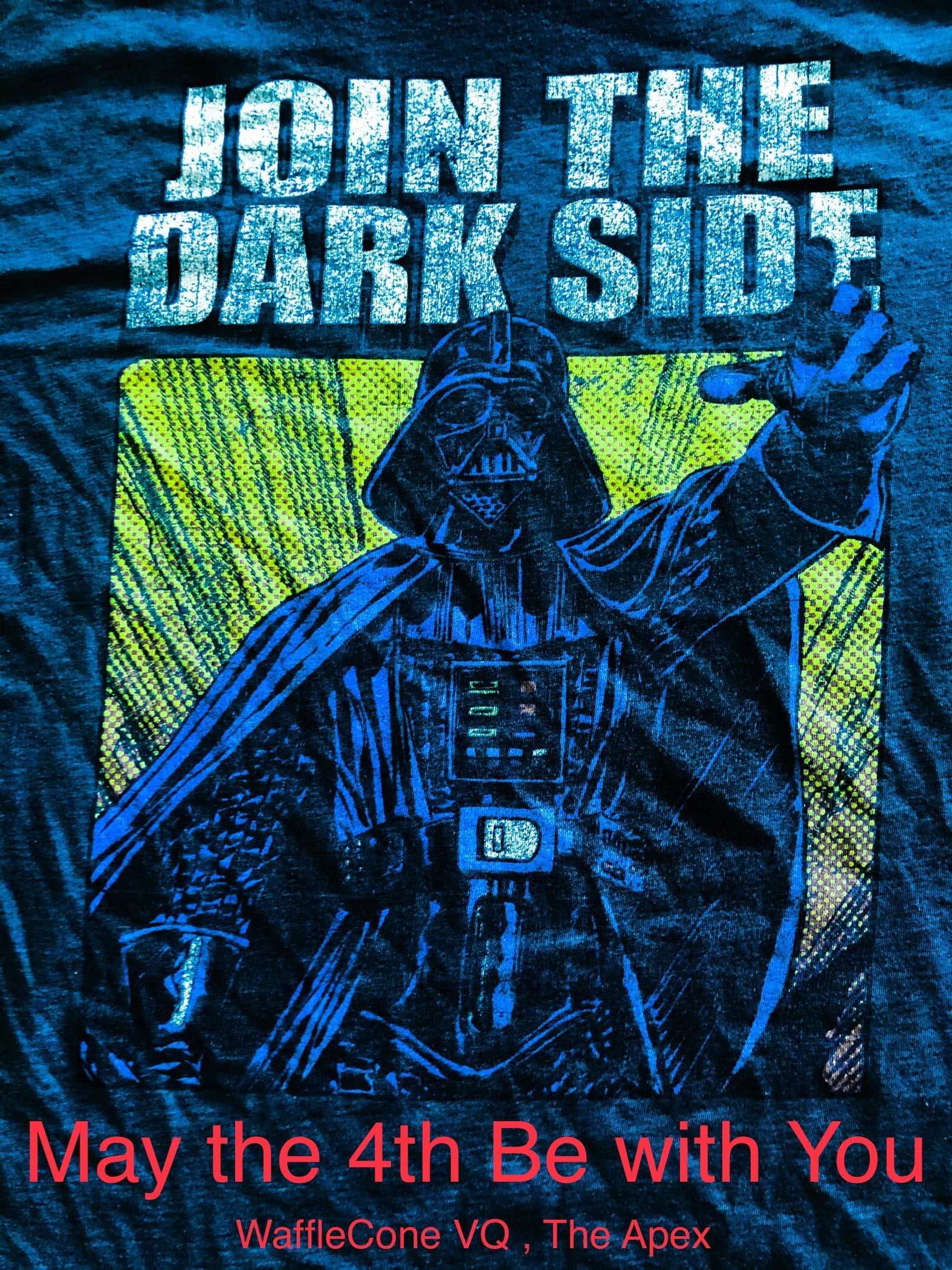 Intro: A long time ago in a galaxy not that far, far away…

The Apex moved back to Phase 1 and opened back up!

All Federal, State, Woodstock/TownLake-ish applicable social distancing guidelines were followed.  Disclaimer was read, posted and adhered to even during post COT Merkin adds.

YHC had Q’d the Redline before for a nice Woodstock 10K with some great HIM’s but this was YHC’s first Q of a BD. (Note to self, YHC has to get that Redline BB out of draft still and post tonight before @Luckcharms blocks THC from the channel).

After several weeks with a Shield Lock of some awesome HIM’s out of the Apex, timing back to Phase 1 mapped up to do YHC’s VQ here.  The Etowah High School topology and coupon supply worked out just right for the planned trip through the galaxy.  Remembering last night, (at 10pm) that today was May the 4th gave YHC a way to put some unofficial Star Wars branding around the planned chaos.

The Thang: THE DARK THANG (It’s Monday, Join The Dark Side of Merkins)

Grab 2 coupons, (cinder-blocks) and mosey up to your own “Merkin Monday” bay location, (parking space).  Place coupons shoulder width apart on the ground in front of you.  Begin the 1st set of 10 Merkins with each hand placed on each of your two cinder-blocks and bring your chest and body down as low as you can go without eating concrete. When done, leave the coupons and Run, Run! (Not a Kessel Run in less than 12 parsecs, but still Run, Run!

Run, Run up the stairs

10 American Hammers, (OYO. However, YHC did not clarify count to the PAX, so some Kodiak count and some were Rogue one here.)

10 LBC’s, (OYO with a mix of Kodiak count & Rogue one. (see above VQ communication mistake by YHC)

Individual Range Totals per exercise:  (Across the PAX)

Finished up with some Mary at the Flag Base and to bring in the 6th.  (Some Leg Lifts and of course more Imperial Walkers and Merkins to end the BD.)

COT: Prayers & Praises for @BradPitts arms and his leading example of crushing BD’s every time.  Prayers for @BradyBunche’s M and recent & future optometry visit/s.  Prayers for @Chancellor, his M & family, current and any future child/ren/triplets. Praises & Prayers from @SnotRocket about things opening back up a little from the tight Covid-19 restrictions.  YHC prayers for niece’s grandmother and praises and thanks to the men of F3.

YHC was thinking we would likely keep it just under 10 PAX for the VQ today. At 5:29am with 8 PAX, @Chancellor came in hotter than a young Anakin on his podracer.  He apparently felt that his SUV was a quicker pace option to Mosey with the PAX to the COP than actually parking.  So, we had a few brief few seconds of wondering if his car was going to get there sooner or if it might take a PAX out in route.  It worked out just fine though.  @Chancellor joined up with the PAX just before the Warm O Rama and his SUV stopped rolling before we picked up our coupons.

The PAX humored YHC during his reading and pointing out of the disclaimer on the Q Board. YHC did announce that most were not paying to be there this morning. (*Note to self: YHC to accept @JackBauer’s Venmo request later.)  The Imperial Walker form across the PAX was exceptional in stationary warm ups today.  Vader would not be patient with the form once we moved to Walking Imperial Walkers.  However, (spoiler alert) Vader is dead so YHC feels we can mark ourselves safe on Facebook for now and still attend any future Ewok parties coming up…

Signs were placed along the BD route including a “Run Run” sign which generated some mumble chatter questioning around the difference between “Run” and “Run Run”. YHC gave some non-answer / answer and until this BB is posted likely will get away with it.

An audible was called by YHC when I realized the Walking Lunges I had planned for by using Google Earth, were @BradPitt range lunges.  (Not like Tatooine distance ranges, but did not look as far on the map as when I got onsite.) So, I cut them in half just before the BD.  Likely all but @BradPitt were happy about that.  Speaking of @BradPitt, it was nice to have the Q and be able to be ahead of him to show the PAX the route for the first 125m’s.  Of course as soon as we hit the Walking Lunges, he was gone!

The PAX killed the Bear crawls!   As mentioned above, the total range per PAX was 135-190m’s.  We are talking about a football field length and more than that this morning of bear crawls per PAX . I was picking up my bear crawl pace at the end to keep up with @Exile, @Chancellor & @SnotRocket who decided to push it to get to 10 more Merkins at the top of the stairs at the end.

YHC started with the PAX as a group, but expected there would be some Spartan beasts and gazelles hitting this route with the focus of a young Luke Skywalker firing his proton torpedoes into the thermal exhaust port on the Death Star.  Indeed there were!

@Brad Pitt, (with his casually posted average of 366 Merkins a day ) was quickly a spec out in the galaxy way ahead of YHC.  @Maaco & @GeekSquad were right up near him at light speed the whole time as well.  @Maaco clearly thought it was Thursday so he was likely in high gear trying to get done early to get to his next insane workout.  As a Rebel spy has shared, this is something he does between his day job of orchestrating the welding of large Star Destroyers for the Empire.  In addition to his normal balls to the wall intense BD focus, I have to hope @GeekSquad was fueled a little more by his inner geek joy that it was May the 4th today and someone else acknowledged it.

Speaking of shared interest, somehow I ended up being directly on the other side of the route of two other Jedi, @Jackbauer and @BradyBunch.  (Technically, I know how I ended up on the other side. They were doing my own BD better than me!)  I did not want to interrupt their BD mubble chatter / bromance but did see them do the 100m Run Run ahead of me at a very quick pace very early in the BD.  When I called out to meet at the Flag at 6:10, @Jackbauer was doing bear crawls and looked back at me like Kylo Ren when Snoke had just tossed Rey around in The Last Jedi .  I did not want to disappoint him, so just yelled back, “Good Job” and that seemed to calm him down.

While YHC did not do the Pre-Run, @Exile not only knocked out 3+ miles prior to the BD, he also played the continuing and critical role of all things Jedi Master for YHC pre, during and post BD.  YHC is going to feel terrible when the need to use a coupon / lightsaber to strike him down comes about in a future BD installment.

To wrap up this saga of a BackBlast, the return of the Apex AO was awesome!  I have to thank @Exhile for bringing and posting the flag symbolizing a new hope for F3 and us all to move back to some sort of normal again.   Thanks to @Chancellor for bringing the coffee for the Coffeeteria & his and @Geeksquad’s recommendation on HBO’s Silicon Valley strikes back series. Thanks to the post COT additional Merkin rally by @Maaco, @JackBauer.  Also thanks to @BradPitt on his strategy lesson on how to get 600 Merkins in on one day.  Lastly, thanks to the rest of the PAX and the men in F3 for getting up and getting at it every day.

The Force, once again Awakens!