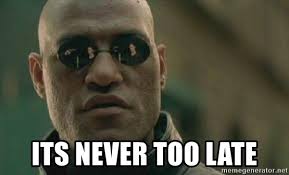 Not gonna lie this one weighed heavy on me.  Work was crazy and the last thing on my mind was writing up a BB at the time.  Looks like Misty is still the only PAX on the north side that still does the BB’s anymore so this being the first one I had ever skipped felt I needed to make it right.  The following events are mostly accurate to the best of memory.

As 0530 hit the bags were picked up and PAX headed for the field.  Pretty sure it was a lot of the usual’s – SSH, WeedPickers, Imperial Walkers.

Instructions were given on Slack the night before to bring a headlamp because we were going to Hombre’s neck of the woods.  After WOR we headed up to the track with bags in tow.  Routine was 11’s – Hombre has strategically place 3 2×4’s up the hill in the woods for anyone wanting to bring extra pain.  Started off with 10 Pull-ups in the woods then back down the hill for 1 Thruster with the bag, then 9 Pull-ups:2 Thrusters, 8 Pull-ups:3 Thrusters and so on.  After Bloodhound gently coaxed Duggar up the hill the last few times we headed back down to the field.  Pretty sure we did a hot lap or two then it was time for Captain America.  Captain America is an escalating 1:4 count ratio of Burpees:Bunny Hops up to 10:40 maintaining the 1:4 ratio count.  Since we had 40lb sand bags handy PAX would do Man Makers instead Burpees and the Bunny Hops would be over the bag instead of back and forth across a painted line.  These proved to be extremely difficult with the only PAX to finish was C4 before time was called.  The only thing more memorable than Bloodhound screaming at Duggar to “Get up!” was Duggar singing “How many man makers does it take before you can call him a man”.  PAX returned to the flag for COT.

Prayers were said but no recollection of specifics

Now I can move forward with a clear conscience of still maintaining a perfect BB record.  Always a pleasure to lead.